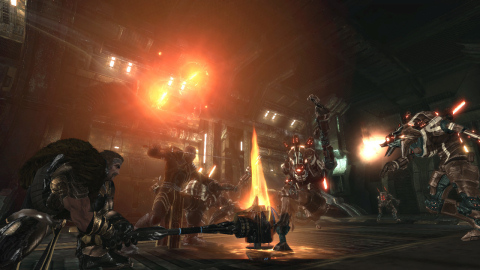 With Too Human right around the corner screens like these seem like a big tease.  It's nice to finally see some new enviornments though.  From what we can tell from the info that came along with them, the "World Serpent" is some huge mile long battleship in the game.  Whether it's a level or a boss or simply part of the mythology is yet to be seen.  For now enjoy these 9 new screenshots.

Also, you may have noticed we are running an ad for Too Human to the right.  If you haven't preordered the game yet I highly encourage you to do so via the ad.  We might just have some exclusive stuff coming up in regards to the game, so keep your eyes peeled!

In other Too Human news, Kikizo had an interview with Denis Dyack in which he talks about the game's length.  He stated that it should take about 15 hours on your first playthrough, but to max out any character you are looking around 15-80 hours of gameplay.

Screenshots after the jump.

WORLD SERPENT “THERE BE MONSTERS HERE…”

Locked under ice in one of the most inhospitable areas of the globe, the Devastator class war machine known only in myth and legend as “The World Serpent” has lain dormant for millennia. It used to be one of the YMIR’s greatest achievements: a mile long submersible battleship that could unleash massive destruction with the merest human thought. When the YMIR were destroyed in the anti-matter strike that would change the future of the world, the remaining Devastator class machines were either scuttled to prevent capture or hidden for a distant future resurgence of the YMIR regime. How many of them truly remain, and how many are mere myths is pure speculation – very little solid data exists.