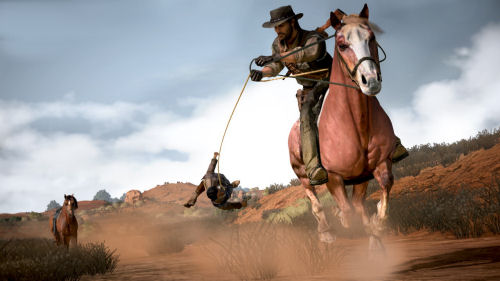 Western themed games have been one of the few video game genres that almost seem to be cursed.  Reception to titles like Gun and the Call of Juarez and Desperados series was luke warm at best, and it seemed as though no Western-themed game could ever do justice to the very sources (The Man With No Name Trilogy, John Wayne's films, and others) that inspired them.  After playing the game at PAX East, I feel very confident in saying that Red Dead Redemption may be the first Western-themed title I've ever played that lives up to its source material.

As Nick discussed in his preview of the game back when it was demoed at PAX Prime, Red Dead Redemption, like many of Rockstar's games, is another open-world game.  The feeling that you get from this particular open-world, however, is a different than the one you get while walking the streets of Liberty City.  Rather than experiencing a virtual New York that's constantly bustling with people and the law's always got its eye on you, the world of Red Dead Redemption is barren, sparsely populated except for some big towns, and a true outlaw's paradise.

Walk into any town in Red Dead Redemption, and you can do just about anything you want.  Want to lasso and hogtie a passing pedestrian for giggles?  Go right ahead.  Feel like pulling your gun on some old coot and shooting him in cold blood?  Feel free to do so.  Want to play a hand of poker with the local grifter?  Just know when to fold 'em.  All of these actions, whether they're big or small, are exactly the kinds of things that were missing from other Western titles.  Rather than telling you what kind of outlaw or hero you are, Rockstar allows you to determine that for yourself.  Who you want to be, whether it's Frank from "Once Upon a Time in the West" or Chris from "The Magnificent Seven", is up to you, Rockstar just provides you with the tools needed to determine that, and a story to provide your character some background.  That more than anything, is what gives Red Dead Redemption so much appeal.  You're no longer being told you're Blondie and being forced into a world that tries to make you feel that way, you're making that sort of a name and legend for yourself in a world that responds to the decisions you make through the Honor and Fame systems. As you commit certain acts in the world, you gain an increasing amount of notoriety, which is reflected either in your Honor and Fame values.  Honor is determined by the moral choices you make (e.g., rescuing a person from a runaway stagecoach vs shooting a random passerby for no reason) and affects how the law and towns react to you, while Fame dictates how well known you are.  If you're the infamous El Guapo, towns may close their doors to you and even try to run out.  If you're a staunch upholder of the law, such as it is, then the local constabulary may overlook a few of your indiscretions so long as they don't cause anyone too much harm.  These kinds of mechanics were all hinted at by the member of the development that I spoke with, though I was unable to see them put into action in the demo I played.

Of course, all of this freedom and wonder could easily be spoiled by clunky or awkward controls, something Redemption doesn't suffer from, fortunately.  Redemption's shooting and cover systems will feel very natural to anyone that's played a third-person shooter before, and they even feel better than any of Rockstar's previous open-world games, like Grand Theft Auto.  Players can also use a special "Dead Eye" ability that allows them to "paint" over a group of enemies using the right stick to move the camera, marking them for execution.  It's a mechanic that certainly helped in a couple of situations in which I found myself, but overall didn't really feel needed.

Many of you may have heard that Redemption will have multiplayer, and some of you may have seen a certain screenshot that may or may not hint at the possibility of co-op.  While no one I spoke with at the Rockstar booth was prepared to give me an answer other than "we'll be talking about that a lot more very soon," a couple of them did seem to have a certain twinkle in their eye when I asked about co-op, so we'll see.  Regardless of whether or not Redemption will have a co-op mode, though, I can't wait for the game to hit store shelves next month.  Not only does it feel like it will finally provide Western enthusiasts with the kind of game we've always wanted to play, but it may just raise the bar for what an open-world game experience can provide.

Now if you'll excuse me, I feel a movie marathon coming on...