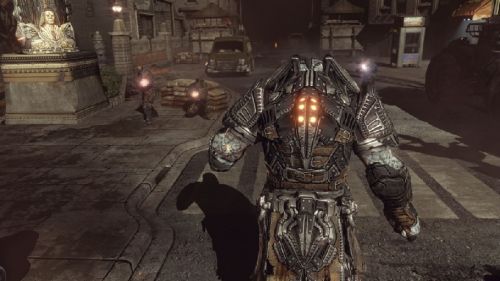 Gears of War 3 has received two, count'em, two new DLC's in past few (okay, six) weeks.  The first was the Horde Command Pack, which features new multiplayer characters, weapon skins, Horde mode upgrades, and a few new maps.  That's all well and good, but the meatier of the two DLC's came out yesterday.  RAAM's Shadow offers a whole new co-operative campaign which takes place before the events of the first Gears of War.

To make things extra awesome, you get to play some chapters as the Locust Horde - and not just any Locusts. You'll be playing as General "Hey, Kim, what's that in your gut?" RAAM himself, along with some of his super-powered, super-elite Locust Bros.  Sounds incredible, but is it $15 bucks of incredible?  Not really, but it's still pretty good.

RAAM's Shadow is a welcome addition to the the Gears franchise.  On the COG side, it's more of the same, which isn't a bad thing.   I'm not going to go into any plot spoilers here, but like most Gears games, I found myself wondering why we we were doing anything; "Why are we in this bank?" Don't know. "Are we in a school now?"  Don't care. "Oh crap, wretches!  It's Lancer'n time!" Awesome!  Mix in some Hammer of Dawn and Seeder set pieces and that's entertainment.

It's Gears campaign DLC.  Take cover and shoot bad guys.  Don't mess up your reloads.   It plays how you would expect it to play.  Zeta team is a perfectly good Delta substitute.  Michael Barrick, whom you'll play as if you're the first player, is an adequate, grumbling, Fenix-esque, mesomorph.  He's kind of cool, kind of bitchy, but one thing's for certain: He's all man. Check out those magnificent chops!  The second player will take the role of Valera, yet another tough-as-nails Gears girl.  COG vets Kim and Tai make up the rest of Zeta squad.  They say very Kim and Tai things.  You know what I mean. This is Barrick's scared face, which is a a million times more badass than your best angry face.

Things get real interesting when General RAAM makes an appearance.  You can expect to be playing as the Locust Bros about a half an hour into the content.  RAAM is a car-flipping, COG-stabbing, Kryll-commanding force of nature.  He's like Ivan Drago, only he simply needs to point at something to destroy it.  RAAM plays differently than any other character in the Gears franchise.  He's even more devastating than Beast Mode's Berserker. When RAAM makes his now iconic pointing gesture a swarm of Kryll will obliterate any living thing in his path. When the Kryll aren't picking the flesh from a COG soldier's bones, they act as his own personal shield.

Right about now you're thinking, "Hell yeah! That sounds great!" - and it is.  If you're RAAM.  Things aren't quite as fabulous if you're playing as one of his underlings.  My co-op partner was stuck playing the Super Elite Theron, which is a fancy way of saying "a Theron guard who will be struggling to get a kill."  Two Mega Maulers make up the rest of the team.  They have reflective Boomshields that will wreak havoc on the puny humans, if the puny humans live long enough to fire their weapons. Spoiler alert: They won't.  It's RAAM's show, and the rest of the Locusts are just there to watch him rip his enemies to shreds.  Seriously.  There's an Achievement for it.  Honestly, my local co-op partner hated the Locust sections.  She said it was like playing spectator mode.  I traded controllers with her, and she was right.  RAAM is ridiculously overpowered compared to his buds. Overall, RAAM's Shadow is good Gears fun.  It adds another fine chapter to a great story.  It is rather short.  It took us about three hours and fifteen minutes to complete, and we were taking out time (messing up our reloads and forgetting to take cover). There aren't any collectibles or "wow" moments that merit a replay.  There are 250 Achievement points that will require a few playthroughs if you're a Chievo Hoarder.  Some are based off the campaign, a few others have to be completed in versus mode.

​It's Gears.  It's good.  If you're a fan, you'll enjoy it.  I think 1200 Microsoft points, or $15 bucks, is a little steep, but fans will get their money's worth.  If you have the Season Pass, RAAM's Shadow will only end up costing you $10 bucks, which feels about right.  But if you've had your fill of Marcus and Co., there isn't enough new content here to bring you back for more.  If you're still on the fence, check out this launch trailer.  If it doesn't rev your Lancer, you may want to wait for a sale on this one.  Of course, all of this pricing talk will be moot if you win our sweet contest!  Check out the details after the video.

Did somebody say something about a contest?  Why yes, yes I did.  Co-Optimus, being the great co-op gaming site that it is, has two fantastic prizes to give away.

1st Prize: A copy of Gears of War 3 along with a GoW3 Season Pass.  The season pass has a value of 2400 MSP ($30) and will net you the first four Gears 3 DLCs, including the Horde Command Pack and RAAM's Shadow.

Simply click on the "Enter Contest" button and follow the instructions.  The contest will end Friday, December 16th and 6pm EST.  Good luck!