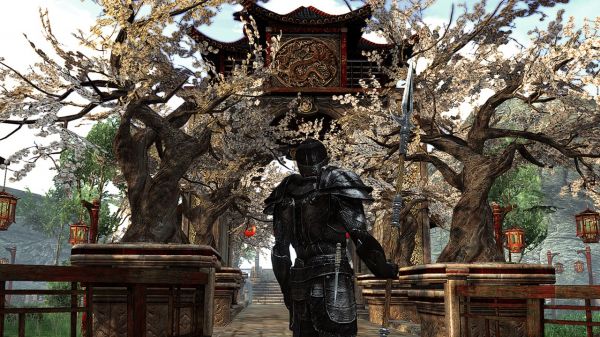 At PAX East, Nick and Kat had the opportunity to check out Two Worlds II, the sequel to the good-in-concept but poor in execution third-person fantasy RPG Two Worlds.  Based on the version of the game that was shown there, Nick and Kat left impressed by a few features of this new entry, but also had a lot of reservations.  Earlier this week, I got some hands-on time with the game… and came away with many of the same reservations.

For a game that is tentatively slated to be released in October, a mere four months away and the game has to be pressed and printed at least a few weeks before, hearing things like "that's a feature we're still looking into implementing," or "we're still working on that," is a bit worrying.  Understandably, there are always things being worked on up until the very last minute, but by the time a game's four months from release (with likely only three months of dev time left), one would expect that major features of the game don't fall into the category of "still looking into implementing."  Also worrying is the fact that three months after Nick and Kat saw a demo of the game at PAX East, based on their impressions and what I've discussed with them, not much seems to have changed.

The demo that I played placed me into the role of a warrior class and a mage class.  Unlike other action RPGs, you are not shoe-horned into a specific character class at the start.  Instead, you're a complete blank slate and you can build your character class as you go.  Want to be a fighter mage or an assassin?  You can create one that has the skills and stats that you want.  Combat and magic skills are kept entirely separate so you have to make a choice about how you want to divvy up your skill points amongst those and some other general/passive skills.  While I didn't get a lot of time to look into all of the talents that you can use, the idea of being able to create your own class with only the skills you want is a very cool idea.  What was less impressive was the actual game controls.  I wasn't sure if it was just the controller I was using, or the game itself, but there was a noticeable delay in between when I inputted my commands and the character on-screen reacted.  Additionally, the combat never really felt all that satisfying.  The warrior would swing his weapon around and hit enemies or knock them down, but the number of hits required to take them down for good paired with animations that would leave you vulnerable to attacks for a second or so left me feeling frustrated more than anything else.  This parity was particularly noticeable with the magic system, which requires you to charge up a spell for a bit before you can cast it; a mechanic that's fine to use, but only when it works as intended and is intuitive. Speaking of casting spell, Kat discussed in her impressions piece from PAX East the magic system that Two Worlds II, which is a pretty cool idea.  Going into the spell screen and being able to select exactly what you want the spell to do, including what it will "chain" into, is a really interesting feature and one that has a good deal of potential.  That being said (that sound you heard was the other shoe dropping), as it stands right now, the system is no where near that full potential.  Much of that comes from the limited selection of spells and effects I could choose from, all of which I was told would be expanded upon, but part of it also comes from no clear instructions about what combining an air based spell with an area-of-effect mechanic will do.  There is a description in the bottom-left corner that provides some information, including the spell's duration and damage output, but there didn't seem a lot of context for what that meant in the game itself.  Sure, this fire spell I created does X amount of damage, but when I casted it on a mummy enemy and saw some of his life-bar tick away, but no indication of how much damage was actually dealt or whether or not it was an effective spell to case.  Action RPGs need to provide players with this kind of feedback so that they know what if they need to change up their tactics, and to give them that sense of empowerment that comes with leveling up and acquiring/using new skills and items.

As far as the co-op goes, I wasn't able to try out any of the co-op modes, but there are two co-op modes that are being offered.  The first is co-op specific quests where you can group up with your friends to go out into the world and battle beasties, collect treasure, etc like in the single-player campaign, and the second is a kind of arena mode where you and your friends face-off against waves of enemies.  Here's the catch: single player and multiplayer is kept completely separate.  Thus any progress/loot you make in your single player or co-op questing will not carry over into the over.  In fact, if you've only been playing the single player campaign and you decide to go questing with your friends, you'll have to create an entirely new character from scratch and start all over.

As things stand now, Two Worlds II does not seem to be escaping from the shadow cast over it by its predecessor.  It may be stepping closer to the light with some good ideas and interesting mechanics, but if the time isn't given to improve and really polish a lot of those ideas and mechanics, it will likely forever remain in the dark.