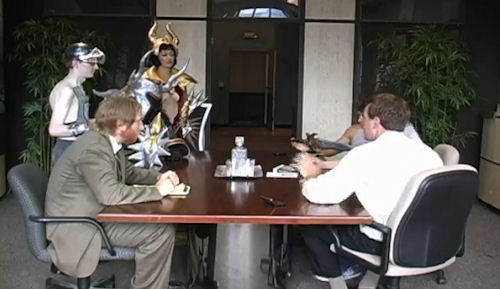 Sordahon's journey into the ridiculous continues, this time he's at the Southpeak Offices negotiating his list of demands in Two Worlds 2.  I guess after constant abuse, job hunting and the need for psychiatric care Sordahon, Two Worlds 2 #2 villain, has had enough of the crap.

With the "hero" of the game on the other side of the table, our cushion laden bad guy lays down some pretty thick demands - including the ability to respawn immediately after being killed.  Does Southpeak accept such an ridiculous offer?  Slight warning - the end of the video has some NSFW audio - so use headphones.

Two Worlds 2 launches on the Xbox 360, PlayStation 3, and PC next month with 8 player co-op.