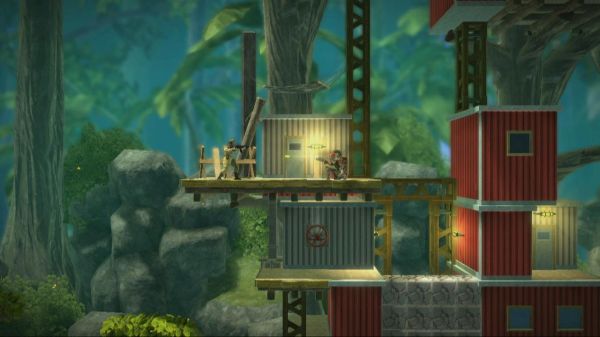 Back in April, Capcom held their Captivate event in April to show off a few titles they've been working on as well as reveal some exciting new titles.  One of the titles revealed at the event is a sequel to the popular remake of a classic NES game, Bionic Commando: Rearmed, which included a co-op mode that, while fun, wasn't all we were exactly hoping for in terms of a co-op experience.  As if reading our thoughts, Capcom followed up on this announcement with some official details were released that teased that the "co-op is back and better than ever."  So with that in mind, we were eager to finally get our hands on Bionic Commando: Rearmed 2.

Picking up the controller and diving into the game, everything felt very familiar and, except for the addition of a jump button, everything felt like I was playing Bionic Commando: Rearmed.  There are those that no doubt feel that including a jump feature in a game like Bionic Commando, which has been lauded for so long for the explicit reason that it was a 2D platformer without a jump button, is betraying the game's roots.  Honestly, having a jump button just feels like a natural progression, far more than a 3D version of the game.  Platforms that seem to be just out of reach can now be reached with a quick jump and an extension of the ole bionic arm.  Waist-high obstacles can also be more easily transversed as you can hop or climb over them.  With the addition of the jump comes a new ability as well, a kind of ground slam that breaks certain bricks in the game (which can lead to secret areas) and tosses enemies back.

The jump isn't the only new feature, though, Nathan's bionic arm has also been given a few upgrades and Nathan's weapons are a bit different as well.  Starting with the arm, Nathan can now add active abilities, such as the ability to perform an uppercut so Nathan can melee his foes or to knock barrels into them, and passive abilities, such as constant health regeneration.  These additions certainly are bigger game changers than the jump ability and open up a world of possibilities for Nathan.  The weapons, too, have been changed a little.  The demo featured two old faithfuls from Bionic Commando: Rearmed, Nathan's pistol (which fires yellow 8-bit bullets) and a shotgun, as well as a new one, the grenade launcher; a weapon that is likely to be just as deadly for co-op buddies as the rocket launcher was in the first game.  When fired, a grenade arcs out and rolls for a brief distance before exploding and razing the ground with fire in both directions for some distance.  This is when the new visuals for Bionic Commando: Rearmed 2 really shined as not only did the explosion look better, but the flames had a haze of heat emitting from them that distorted the view around them slightly. While the demo was a blast to play, and I could have kept on playing it were it not for other appointments, the co-op mode was, unfortunately, not available.  What's more, the developers from Capcom with whom I spoke weren't ready to talk about it quite yet.  The most they'd say was that it would be two player couch co-op again, like the first game, and that it would still play much like the first with two players swinging, shooting, and, now, jumping across the levels, they also wanted to have a few more moments where each player would take on different "roles."  This wasn't explained in great detail, but seemed to imply that certain areas of the game would require players to work together a bit more to take down foes.  When asked if the players could interact with one another using their bionic arms, we were told "we're not discussing the specifics of co-op yet, but we're not ruling anything out."  Entirely non-committal, but we can always hope for the best.