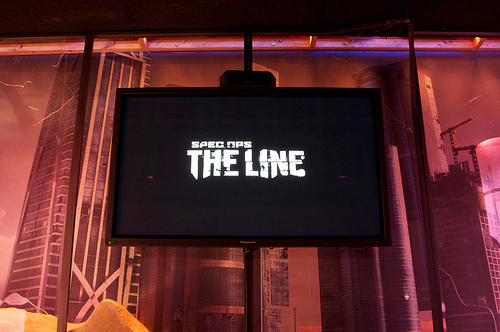 One game I was really excited to see in action at E3 was Spec Ops: The Line.  Published by 2K Games and developed by Yager Interactive, the setting and visuals have gripped me since the first teaser trailer.  The setting of the game is in the destroyed city of Dubai, which has been ravaged by a vicious sand storm burying most of it's structures.  We sat in on a demo of the game, in what looked like one of these buried buildings, at the recent E3 expo.

You play the single player game as Captain Walker, a delta force veteran who is sent to look for Colonel Konrad.  Konrad went missing after staying behind in Dubai and there's been no contact with him for quite some time.  The demo we saw had Walker's team of 3 looking for a contact named Gould.

The interesting thing about the game is the stark contrast in environments - top side it's bright with lots of yellows and whites and huge view distance.  But when underground things are darker with lots of relics to see, the corridors are tighter and there's a sense that danger lurks at every corner.

We watched as the team made their way through an old underground palace looking for a way to get to the surface.  Bits of light shown through one side of the lobby and after a few carefully placed rounds into the glass, sand poured in and the team went to the surface.  This dynamic sand gameplay element will be used throughout the game's campaign. Once there they were greeted with a long stretch of highway with soldiers (or maybe civilians) hanging from every light post.  The bloom lighting made it difficult to focus on the dark silhouettes of the swaying bodies.  During all of this there's plenty of conversation between the squad furthering the story - and there definitely appears to be a strong focus on the narrative with just as many twists, turns and players as a Tom Clancy novel.

Sadly, despite having three character in your squad, the game won't feature co-op through out the campaign, because of this focus on story.  Instead co-op will be included in a separate mode of play, though no details were available yet.

Overall Spec Ops: The Line is looking to be  a gritty 3rd person military shooter.  A lot of details weren't available about the game, so it seems to be a ways off, but what was presented looked action packed and fun.  Yager wants the game to be about in your face, tooth and nails, action and fighting.  They want a game that's about the characters and the story.  Perhaps this is best exemplified by the last scene we saw where Walker and his squad are looking over their informant - Gould - getting torture by the local military.

One of the squad members tells Walker he has the shot and asks if he should take it.  It appears this player driven sequence gives you the option of letting the informant die if need be because of the risk involved.  Back and forth the squad argues on whether or not to take the shot until finally, Walker fires starting an all out street battle.

Spec Ops: The Line hits the Xbox 360, PlayStation 3 and PC next year.