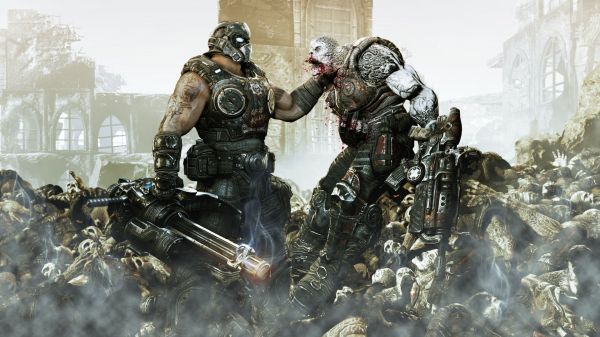 Starting July 29th, you can influence the fate of a Gears of War 3 character and donate to the Child's Play Charity in one fell swoop. Microsoft and Epic Games will be offering two Avatar shirts (age gate required to view link) on the Xbox Live Marketplace: one declares "Carmine Must Die" and the other pleads "Save Carmine".

Purchasing your choice of Avatar shirt casts a vote for the corresponding sentiment. The final tally will ultimately decide whether Cog rookie Clayton Carmine - a new character to the series - survives the campaign...or dies a grisly death and joins his deceased brothers.

Additionally, anyone visiting the San Diego Comic-Con can get their hands on real-life versions of the shirts for $20 apiece at the NECA booth. This purchase will also go to Child's Play, and will count as an early vote in the promotion.

No price has been announced for the Avatar shirts yet. So what's it gonna be?  What's the co-op thing to do?  Utilize Carmine as a human shield?  Or let him live?