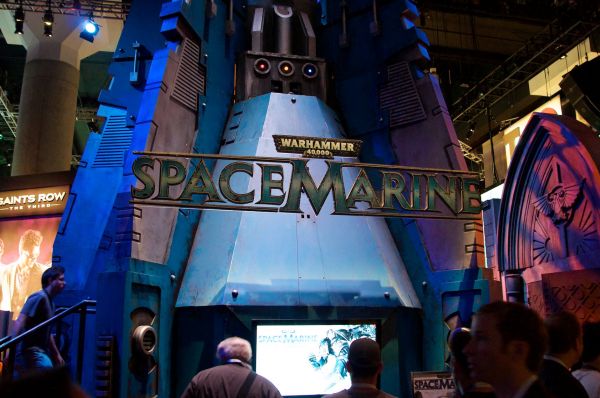 I only got to spend a few minutes with Warhammer 40,000: Space Marine from THQ and developed by Relic, but it was all I needed to know this game was going to be a viscerally satisfying 3rd person action game.

The short demo dropped you into the roll of a squad commander who will be flanked by two or three other marines through the entire campaign. Sounds like a perfect recipe for co-op, but the THQ rep dodged the question and just said - "right now we're not discussing co-op." It's already been announced for the game at the very least as a separate mode.

After a brief cutscene it was off to the ork slaughter. Enemies come at you in giant waves and you can shoot them with your bolter or chainsaw them with your chainsaw sword. The combat is fluid, brutal and gloriously bloody. I can only describe it as some sort of strange macabre dance filled with green jibs of ork and their red blood as the big bulging space marine parts the sea of their bodies. During combat there are also certain cues that allow you to perform brutal finishing moves for even more blood shed.  Did I mention this game is bloody?  The orks may waaaaaagh and threaten you - but they simply don't stand a chance.  So while your gun works well enough to hold enemies back, I think most players are simply going to opt for the slice and dice method.

The demo concluded with a mini-boss battle of sorts as a giant ork with a hammer came attacking.  Fighting him involved some normal combat mixed with button queues to perform special moves.  His life came to a satisfying end as did the demo.