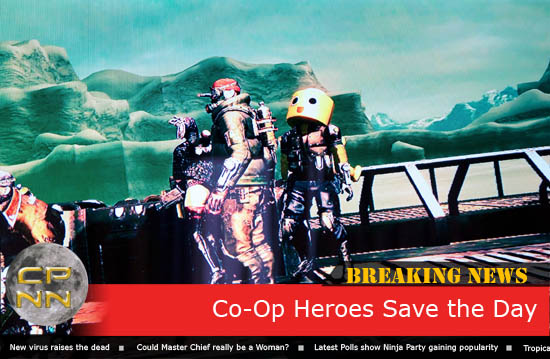 This Week in Co-Op, Co-Optimus News Network corespondent Jessica Jenkings interviews our own Nick Puleo and Sam Tyler on their latest mission in Lost Planet 2.   Jessica asks the hard hitting questions as to exactly what went down on the battlefield and just why the heck there's a giant Servbot helmet involved.

CPNN News Corespondent Jessica Jenkings - "What exactly were you guys doing at the train station?"

Nick - "We'd been following up on a tip that there was some pirate activity near there. We were in the process of trying to secure a large weapon - one needed to take down an even larger Akrid."

Sam - “I remember things differently. I was sitting at home in my usual attire when Nick rings me bleating on about giant sonar emitting Dino freaks. I turn up at some back-of-beyond shanty town surrounded by space pirates and Nick has the tenacity to say that I was dressed inappropriately. I mean what’s wrong with a giant Servbot helmet and a novelty teddy bear backpack? I put trousers on for him ”

CPNN - “I see. Well, uh...interesting choice of formal wear. Nick, We heard that you single handedly killed 30 space pirates. How did you manage to do it?”

Nick - “I had some help thankfully. Sam was handy with the long shot, covering my back as I used the heavy armor to mow down the enemies. We had two other soldiers on the mission, but they mostly split off and did their own thing. Of course thanks to Sam’s giant yellow head - we had a pretty good distraction.“

Sam - “I live my life via two mottoes - ‘Every Sam for Himself” and “Survival of the Fattest”. Whilst Nick thought I was protecting him using my sniper skills, I was actually using it as an excuse to stay as far away from the action as possible. Replacement novelty helmets do not come cheap.”

CPNN - “Is it true that two large Akrid attacked then? What did you do?”

Nick - “Well...we got knocked down...a lot. But eventually we just started shooting the glowy spots until they were no more.”

Sam - “When they first appeared I was not scared, they were tiny like the ickle dinosaurs from Jurassic Park. Turns out that I was getting the concepts of small and faraway mixed up again. They were huge sonar emitting monsters. Luckily on this planet all fauna seems have evolved with a glaring shortcoming - namely their weak spots glow orangey red." CPNN - “So Nick, what REALLY happened on that train? We find it hard to believe that something could actually EAT it.”

Nick - “It was the biggest Akrid I’ve ever seen. It had huge teeth and came up from the ground swallowing pieces of the train whole. We ran as fast as we could taking down pirates while heading towards the front car. It was intense. I’d be lying if I said I wasn’t scared.”

Sam - “As a Brit the train journey was no more harrowing than an average commute into London. The numerous bloodthirsty pirates and humongous Akrid actually made a pleasant change to the ever present smell of urine and tinny music. I’d be lying if I said I was scared. ”

CPNN - “So how did you both survive?”

Nick - “I blew it’s fucking face off with a giant cannon. Isn’t it obvious?”

Sam - “This is typical. I’d been roused from my house, chased by space pirates, charged by giant dinosaurs, made to jump from a moving train and this is the thanks I get? Whilst Nick was enjoying the satisfaction of blowing the Akrid into the world’s largest pile of all you can eat Calamari, I was locked deep in the bowels of the engine room keeping the train cool. Although Nick took the final shot, co-op teamwork was needed for success.”

CPNN - “Will you work together again on another mission?”

Sam - “If the pay was the same as this time, I reckon I would. The second Lost Planet has proven a great place to revisit and one that truly rewards working together. However, if Nick ever wanted to join me sometime fighting the rumoured Zombie outbreak at Fortune City he better be prepared for my new outfit of an Indian headdress coupled with ass-less chaps. "

Nick - “Of course I’d work with Sam again, but next time I want my own teddy bear back pack.”

CPNN - “This has been Jessica Jenkings for the Co-Optimus News Network reporting live from the smouldering corpse of a giant Akrid. Back to you Bill in the studio.”