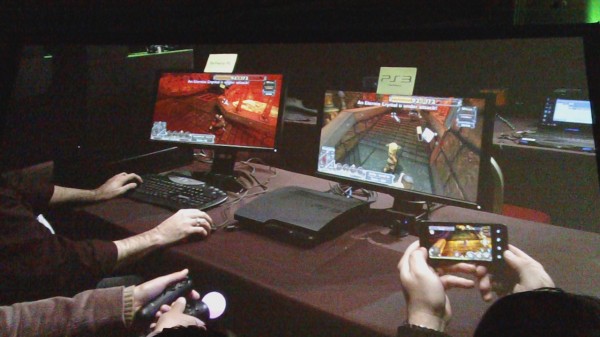 Finally looking at some cross-platforming action, Dungeon Defenders brought PC, Droid Phone, and PS3 players together at CES. Now, the Droid phone has to be pretty high powered to do something like playing in the same game as the PC and PS3 players, so Nvidia pitched in a bit to give this handheld device the boost it needed to keep up. Ripten takes a look at the specs while both Co-optimus and Ripten awe at the co-op capabilities.

This so-called super-phone performed well at CES when it was shown off along side a PS3 (with the PS Move going) and PC running the game without issue. The thing that set off the awe-o-meter would have to be that these three players were playing together and keeping up with one another.

Shiny new Superdroid phone with Unreal 3 capabilities? Also Dungeon Defenders? Also co-op cross platform? Where do I sign up? Oh right, this Optimus 2X (love that name) Droid phone requires a contract with Verizon and hasn’t been released to the general public just yet. Keep an eye out though, because console gaming on a handheld is huge.

For the rest of us, if Dungeon Defenders stays cross platform for its release in a few weeks - even with just PC and PS3, that’s also huge! I’d love to be able to play with my buddies, no matter where their gaming loyalties lie.