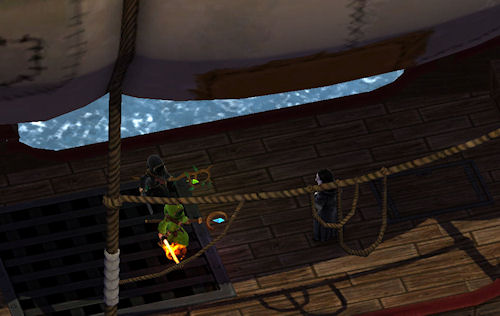 This Week in Co-Op Tally and Nick ride a magical mystery ship into the world of Magicka - the recent 4 player spell casting co-op game from Arrowhead Studios and Paradox Interactive.  If there's lessons to be learned they are: wizards a clumsy, their robes are flammable, water and electricity don't mix, and blowing up friends is often hilarious.

The journey began a bit apprehensive, after all, all of the stories about bugs and crashes and whatnot made our co-op duo a bit nervous.  Thankfully I brought along my staff of stability 5 and our play session remained...mostly rock solid.  That was until Tally managed to get stuck in a mailbox.  I guess she just wanted to check if the next issues of Wizards Weekly was in.

After that mishap it was easy to see that we were wizard n00bs.  I lost count of how many times I accidently cast flaming meteors (Earth   Fire) on my head or shocked myself while trying to stop an oncoming goblin horde.  Worse yet - shocked Tally.

If there's one lesson to learn in Magicka its that Water and Lightning don't mix - and that's no matter what the spell.  For instance, if your robes are wet and you try to cast rez to bring back a team mate (Lightning Life) you'll find the spell shorting out.

One particularly dangerous combination is the ability to create landminds - and not tell the difference if they are healing (Life Shield) or arcane (Arcane Shield).   This was evident during our boss fight with the snake where we laid out mines to trip him up - but sometimes placed the wrong type.  This either resulted in us exploding across the screen (Wizards can FLYYYYYY) or healing the boss.  Whooops.

Our quest took us through the first three chapters of the game with only minor difficulty at a few parts.  LIke I said - it wasn't the enemies that killed us as much as it was our mixing of spells.  One particular moment of co-op I liked was when I decided to cast "Water Bombs" (Earth Water) in projectile form while Tally casted Lightning into the group of wet foes.  We made quick work of them...until one jumped on Tally's back and rode her right into the water.  Whooops.

Tally was kind enough to record some video of our expedition - which I think is the only way to truly appreciate the game's chaos.  Enjoy!