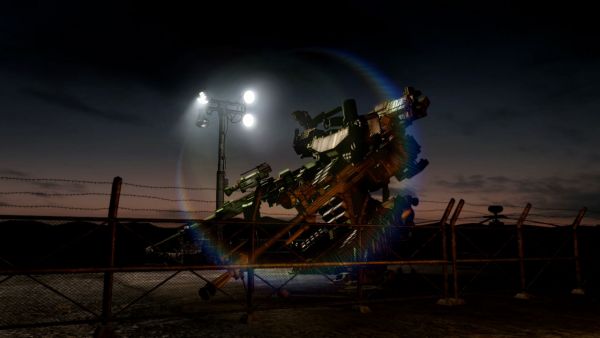 Being a fan of all things that take place in giant, customizable war robots, I've more or less kept up with the majority of From Software's Armored Core series, which has been primarily single-player through its franchise. A few years ago we saw an attempt at co-op through a few missions in Armored Core: For Answer where players teamed up on a select number of missions to square off against a foe. After an announcement early last year followed by a whole lot of silence, Armored Core V is looking to bring us the real deal in co-op - not just a mode.

After the announcement of Armored Core V last year, a lot of people wondered what happened to the title after so much time had passed. A full year later, the developer comes forward to announce a few major changes in the way Armored Core works, and how it will be published state-side.

The basic framework of creating your own mech and taking on missions remains unchanged, but the game is now team based. Players form teams consisting of a fixed set of members. You take on missions exclusively with players pulled from this team.

Missions are played with up to five members from your team. Of the five, only four drop down to the battle field. The fifth player stays back as an operator, giving guidance to the team. The operator has a special screen which seems to show more detail about the battle.

Communication will play a key part in bringing Armored Core Online - the operator will be in charge of coordinating all of your efforts, but action-packed battle isn't the only type of gameplay here. The developer warns you that strategy will play a key part in your ability to complete missions and earn your ranking - placing turrets and other defenses at key locations could be the difference between success or failure.

Along with remapping the controls, there will also be a lot of extra customization in the way you build your mech compared to prior Armored Core titles.

ACV will have a large number of parts for your mechs, something that seems to be said for every Armored Core game. This time, because of the focus on team play, they're adding some part types that have not been seen in the series before.

Something new to think about as well, the toy leader in mech design will be publishing Armored Core V - That's right, From Software and Namco Bandai will both have a hand in bringing us new mechs. The 80's style little kid in me is going berserk right now, I hope you all feel the same (or get off my lawn, filthy kids).

It is said that Armored Core V will be playable single player, but that comes with a warning:

The game can also be played single player by simply forming a team of one, although Famitsu suggests that you only do this if you have confidence in your abilities. The magazine also says that offline play is available for those who can't go online, but it does not provide details.

If you're having issues connecting with people to play with, fear not. Not only do we have a great forum system for setting up playdates, but an Armored Core specific social networking site is around to help you out as well. We will keep an eye out for an official release date, but it looks like Armored Core V is back on track with a 2011 release on Xbox 360 and PS3.