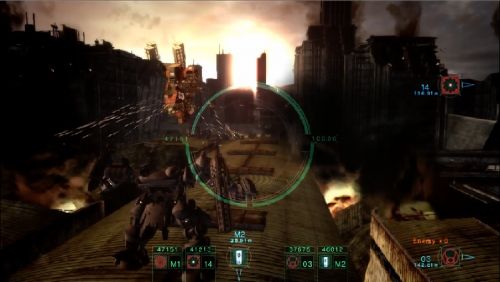 I've been playing a little Armored Core V lately, and I'm really enjoying my time building, customizing, and fighting with the sleek mechs the series is known for. The other day I logged in and was greeted with a message/warning that Online Boss Battles would be available this weekend. What the heck is an "online boss battle?" I was about to find out.

Friday morning, I hooked up my finicky Hauppauge PVR to capture some screen shots. I soon realized ACV looks better in motion, and decided I may as well record my adventure for science, as well as the viewing pleasure of the Co-Optimus community. Sit back and listen to my smooth dulcet tones as I try to explain what the heck is going on in this gameplay video. ACV is a From Software game, which means nothing is explained clearly, if at all. I'll do my best to fix that. Fair warning: I'm new to the series, and it shows.

I built this mech so it could do a little of everything. Sadly, it's not very good at ANYTHING.

There you have it. A seven minute ass-whoopin. I did manage to learn a little more about Online Boss Battles. Four players can go to war against super-powerful boss mechs. You can either go as a team or recruit random mercenaries. If you're not ranked high enough to initiate the battle yourself, someone else will probably hire you as a merc. The free Online Boss Battles are live only from 9am PST April 27th through 2am PST, April 30th. (Sorry abou the delay, I got into a fight with Youtube.) I believe this will be a weekly thing. Hopefully that will keep the servers full and active. Maybe I'll even join a team!

Armored Core V supports five player online co-op, although most of the real co-op comes in the form of two player Order and Story Missions. The game is available on the Xbox 360 and PlayStation 3. We gave it a 4.5 out of 5 in our Co-Op Review. If you're into mech games, check it out.