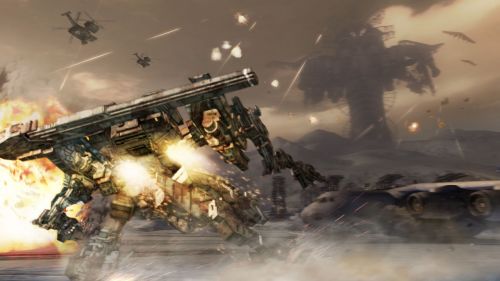 Armored Core V might not have been a smash hit in the states, but that's not stopping Namco Bandai and From Software from bringing the mech fighting sequel stateside. Armored Core: Verdict Day was announced earlier this week in Japan and today is was revealed it will be coming to North America. This title  will be a true sequel to the events to ACV, not that anyone could follow them. The world is still in a constant state of war as opposing factions vie for territory, seeking to control of what remains of the planet's resources. I don't remember much resource gathering in ACV, but I do remember raining down metal hell on opposing Cores. Good times.

I'm one of the rare few who completed all of the Story and Order missions solo. Sure, I could have played them cooperatively if I had picked up the game in a timely fashion, but by the time I got my eager mitts on it most people had moved on or were neck deep in the PvP Conquest mode. This mode offered a persistent battle field where squadrons of up to 20 players could destroy each other for territorial dominance. It was a pretty sweet mode, indeed, if you're into PvP --and you could get a team of four ready to fight in a moments notice. ACV quickly earned a reputation for being a pretty damn good, if a bit esoteric, mech game, if you wanted to play online. For those of you who wanted to play solo, or if you only had a single co-op partner, the game wasn't that much fun. From Software is trying to make AC: VD a bit more inclusive for solo players, allowing them "to create and recruit a squad of A.I. controlled mechs and enjoy the robust feature sets of co-op and multiplayer modes." I hope smaller co-op squads can benefit from the AI, as well.  There will also be a multiplayer matchmaking system that should get players into battle more quickly.

Veterans of ACV will be able to bring over their game save data to AC:VD. You will be able to upgrade your familiar Cores with new parts including armor, weapons, and boosters. Operator mode, which allowed a fifth player to tactically issue orders to fellow sqaudmates while viewing an overhead map of the battlefield, will also be making a return.

Armored Core: Verdict Day will most likely feature the same co-op features of its predecessor, supporting two player online co-op for the Story and Order missions, and random instances of co-op for up to five online players in Conquest mode. It will be available this fall on the Xbox 360 and PlayStation 3.