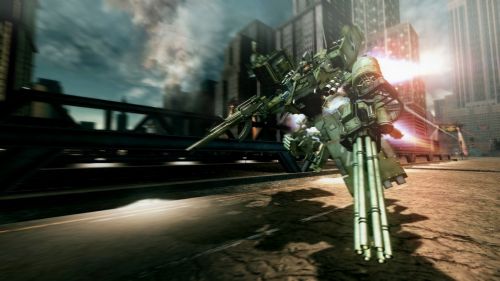 The fast-paced mech shooter designed by FROM Software has a video out that showcases the both the online 5-player battles and the customization menu from the game.  Armored Core V will feature 5-player online co-op for both the campaign and individual skirmish missions. Check out the video bloew:

The developers have noted that they are focusing the combat on tactics rather than the twitch-based style of the previous titles. Larger battlefields are also highlighted in the video, and with this comes an interesting change to the team based play.  In a 5 player co-op squad, one player will be acting as "The Operator" issuing commands to the rest of the team.  Quite the shift for the series, but a welcome one as this may be the first mech game in a while that satisfies our co-op needs.

Of course, later into the video we get a glimpse into the standard customization menus that the Armored Core titles are known for. New weapons and shiny gadgets are all at your disposal so that you can personalize your mech to your playing style and compliment your co-op partners for a tactical advantage during your missions.

Armored Core V is supposed to hit in early 2012.