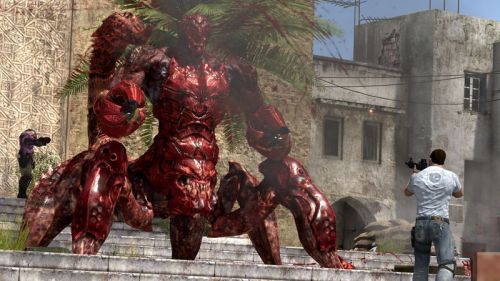 Serious Sam 3: BFE is still coming to the Xbox 360. That's a relief. Playing on the computer is nice and all, but I really want to play from my couch, so I'm all for it. Croteam, the developer of the Sam franchise, recently gave a status update for the console versions in a Facebook post.

The good news: They've been hard at work on the Xbox 360 port of SS3: BFE ever since the PC version was released last November. The bad news? They need us to "please be patient for around 4 more months." That's September, for those of you who are abstaining from math. Apparently the Xbox 360 is no spring chicken, and the devs are wrestling with the technical limitations of the aging hardware. As long as it looks better than it did on my laptop, I think gamers will be okay. After the 360 version is finished they may move on to a PS3 port, which will take even more work. I contacted (tweeted at) Devolver Digital's CFO and Twitter personality, Fork Parker, for more information. Sadly, like most of my  twitter conversations, it ended with an uncomfortably hashtagged scrotum. When we get a solid player count for co-op modes we'll let you know.

The PC version of SS3: BFE is as boss as ever. It's out now, and supports four player local co-op and 16 player online co-op. We gave the frag-fest a 4 our of 5 in our Co-Op Review.