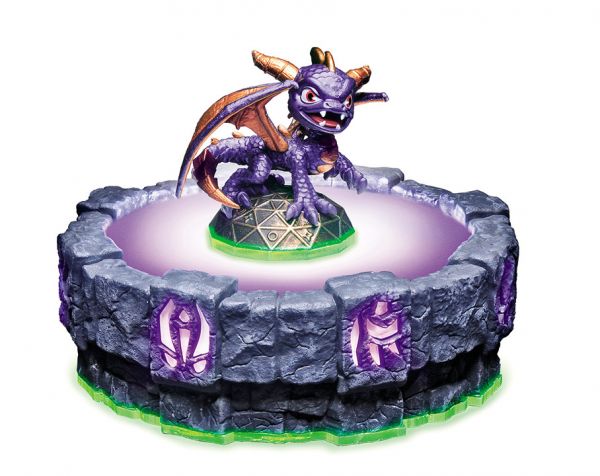 If the movie Grandma's Boy has taught us anything, it's that people who work in the gaming industry love to put action figures all over their desks.  Now you can put them in your games.  We're not talking cards here, we are talking action figures!  Or statues.  Action Statues!  When you by a copy of Skylanders: Spyro's Adventure, you'll get the game, some cards (blah), three action statues, and a Portal!  The Portal will read a microchip on the underside of the toys, enabling you to play as that figure in the game.  There will be 32 total, so this has the potential to be a cash cow.  Each toy starts at level one and can be progressed through level ten.

What about co-op?   Just look at Spyro up there.  Doesn't he look lonely?  Dry your eyes, little dragon!  Two figures can be placed on one portal for co-op or competitive play.  What if little Jimmy has an Xbox 360 and little Susie has a PS3?  No problem!  The video says that you will be able to play cross platform, so it should be interesting.  We have some great screenshots and pics of the statures themselves.  If you have any doubts, check out this awesome trailer.

How cool was that?!  Why do I feel like playing high school football in Texas?  Weird.  Skylanders: Spyro's Adventure is due out September 30th.  It will be on the Xbox 360, PlayStation 3, PC, and Wii.  Right now, it appears to support two player local co-op.  We'll keep an eye out for more details.