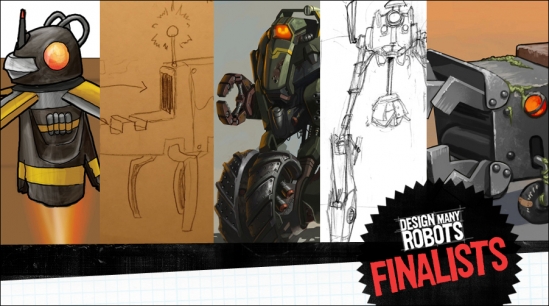 Demiurge Studios put out a contest a few months ago that requested some guest artists work on some Robots that may appear in Shoot Many Robots. As you may have heard about Shoot Many Robots, the game features many robots in which to shoot. The design of the game is a side-scrolling shooter featuring an over-the-top hero, and up to four player co-op with loads of weapons and customization in the game. The Design Many Robots contest came up with some great designs, with some pretty vicious-looking robots that require shooting.

For me, looking at these finalists it would be impossible to decide just one robot to appear in the game. The one called "Gnash Britches" seems the most co-opable robot - he/she/it seems like it would take some extensive teamwork to take down. But I digress, you take a look at the images and decide for yourself.

When we announced this contest during this year’s Game Developers Conference, we weren’t able to anticipate the outpouring of incredibly creative ideas we’d be seeing put into the project both on our forums and in-person during PAX East in Boston last month. We’ve spent the last month sifting through an enormous pile of blueprints and ‘Why didn’t we think of that?!’ concepts, and we’ve narrowed it down to five of our favorites. We simply cannot wait to have the fans choose which robot will officially become part of our game's first wave of downloadble content.

Shoot Many Robots is set to appear later this year, and we really can't wait to see what the final design is. Go vote for yourself, in the name of community.