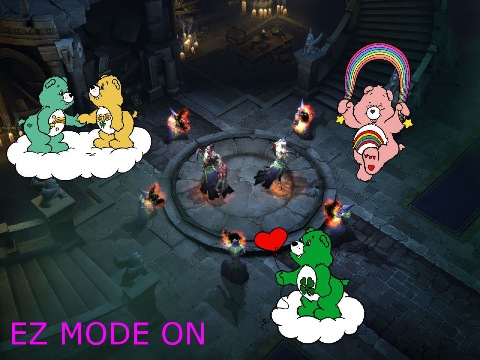 Well, Blizzard has done it again folks.  Another new "feature" of Diablo III has been revealed, and if you thought the rainbows and unicorns were bad, you'll hate this.  A checkpoint system will likely be put into place, which means no more totally fun and enjoyable (in a masochistic way) trips with no gear back to retrieve your corpse.  BLIZZARD!  Throw us a bone here!  There is no greater feeling than dying repeatedly to the same monsters over and over, with a long walk in the nude in between each death.  And what about the challenge?  Defeating enemies without any of that overrated gear weighing you down is a nice change of pace.

In the tradition of other famous fan edits, we've gone ahead and created our own rendering of Diablo III above.  This time, it's not what we want the game to be, but what we fear it will turn out be like.  Rainbows, Care Bears, and EZ MODE.  You heard it here first, folks.  I'm trying to get an internet petition ready, because I know that's the single best way to make our voices heard.  We like our Diablo dark, shady, and mind-numbingly difficult and/or boring, thank you very much!