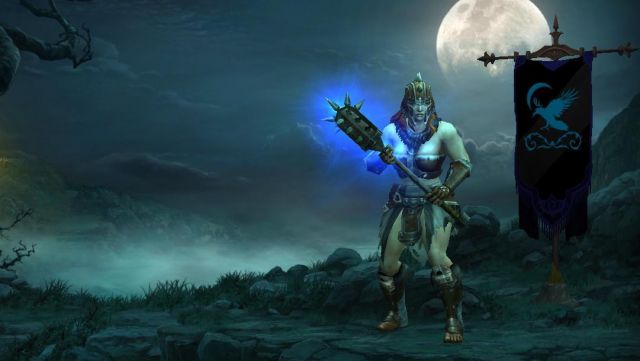 Spells… black magic… mantras… these are not the weapons of a warrior. A warrior leaps first into a throng of foes and drinks deep of the fury within. A warrior bathes in the blood of his enemies and only feels remorse when there are none left to kill…

With the exception of the Wizard, the Barbarian is the one character in Diablo III’s lineup that feels much like his counterpart in Diablo II. He still ignores the relative safety afforded by damaging the undead and minions of hell from afar in favor of getting up close to the action, and many of his skills even bear the same name as those found in the predecessor. What differs, though, is the way those skills are utilized and the strategy you implement to turn yourself into a whirling dervish of death.

Rather than using mana [Barbarian Note: Mana?! What is that!?] to use your abilities, or having separate Combat Masteries/Warcries trees, everything has been streamlined into three categories: Fury Generators (deal damage), Fury Spenders (today’s forecast calls for a chance of blood showers ), and Situational (the Grim Reaper personally thanks you for the increase in business). At any given point in combat, you will always be using at least one, if not two, of the Fury Generator skills, and the Fury Spenders/Situational skills to clean things up. As the names imply, the Fury Generator skills gives you the fury needed to fuel the Fury Spenders and a few of the Situational skills.

Within the Fury Generator skills, you’ll find what comprises much of the Barbarian’s “bread and butter.” [Barbarian Note: Meat and mead!] Bash deals a large amount of damage to a single foe, while Cleave is intended to clear out groups of weaker foes, and Frenzy allows the Barbarian to land his blows even faster. There are also ground covering abilities like Leap Attack and Furious Charge, and the party defense boosting War Cry, that generate a fair amount of fury, though these abilities also come with cooldowns. Most of these abilities deal some percetange of the Barbarian’s main-hand weapon; so while you can dual-wield or go the sword and shield route, doing so will limit the amount of harm you’ll be dishing outl with the Barbarian’s skills. However, the main purpose of these skills is really to build that fury gauge so you can unleash havoc with the Fury Spender and Situational skills. While the first few skills in each of these categories may not exactly make you feel like the battle-hardened warrior from Mount Arreat you initially envisioned, there are some really good early level skills that will float you into the later level devastators. In my Barbarian build, I found myself using basic skills like Bash/Cleave quite frequently to help generate my fury so I could channel it into the Hammer of Ancients, which deals 180% weapon damage to all enemies immediately in front of you, and Battle Rage, which increases damage and critical hit change for 30 seconds. Later on, I switched to Frenzy as my main damage dealer with Leap Attack as my initial attack/distance closer, which then lead in to Battle Rage or Rend, a damage over time ability. The biggest hitch I found to the Barbarian is that in between levels 6 (when you gain your 3rd active skill slot) and 12 (the 4th active slot) you tend to spend a lot of time with your Skill Pane open in order to quickly switch out skills when needed.

From a co-op gameplay perspective, few of the Barbarian’s abilities are designed to really support your teammates; rather, the character himself/herself is the support. While the Wizards, Witch Doctors, and Demon Hunters snipe at foes from afar, you stay close to the action and keep the diabolical foes away from your teammates. If that’s not enough, the War Cry or Threatening Shout abilities may provide that extra bit of help that’s needed to save the day by giving your allies a defensive boost, or reducing the damage dealt by enemies.

The Barbarian class in Diablo II was never really one of my favorites. I much preferred the intricacy of the Assassin class or the darker arts of the Necromancer, so I naturally thought that the Monk and Witch Doctor classes would be my favorites this time around. While I have enjoyed the brief amount of time I’ve spent with the Monk, I’m finding the sheer brutality and power of the Barbarian to be far more fun than expected. There’s something so satisfying about hitting an enemy with a powerful attack and watching his limp body go flying off the screen. When the full game is released next year, Diablo had better watch out. I’m coming, and I’m bringing a mighty big hammer with me.

[Barbarian Note: That... is not the hammer]