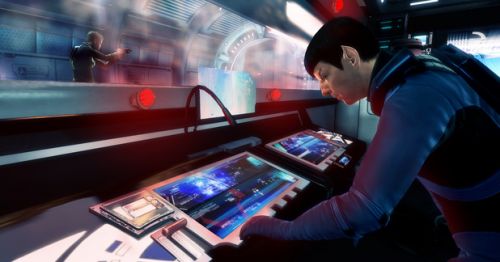 In 2009, Star Trek’s reboot onto the big screen has certainly given nerds like us something to drool over. Once we heard that a co-op game was being developed right alongside the success of the movie, we knew we could have a real winner here. Many new Star Trek screenshots have surfaced recently of Kirk and Spock working together to save the galaxy, with an old enemy we can hardly recognize.

Just like their distinct personalities dictate, both Kirk and Spock take on different gameplay roles throughout the co-op campaign; Kirk taking on the brunt of the upfront action, while Spock Vulcan pinches and strategically takes out his enemies through stealth. From the screenshots themselves, we get a pleasant look at how Kirk and Spock may be working together during co-op, as well as their main opposition. Many of the other pictures feature the main alien race this game, known as the legendary Gorn, who have been completely revamped since their debut on the original Star Trek TV series. Trying to compare the ferociousness of the Gorn from the past to the ones featured in this game is like trying to compare night and day together:

See what we mean?

Star Trek will be coming to the Xbox 360, PlayStation 3, and PC this April 23rd. Oh, and in case anyone missed it, here’s the latest Star Trek trailer, “Salvation” to get pumped up with.