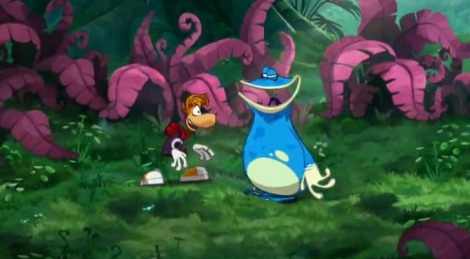 So after a long and quiet hiatus, Rayman: Origins came out of left field with a release date and pre-order availability. But to be quite frank, we haven't had the chance to explore exactly what we'll be getting in this full retail (i.e. more expensive) package. For the most part it's a straightforward affair, but thanks to Ubisoft's press blast we can say that the below information is now as official as it gets.

First off: four player local co-op throughout the main campaign, which we already knew. Now comes word that Rayman: Origins will support drop-in/drop-out functionality. Twelve different environments will be comprised of 60 total levels that are designed specifically for single and multiple players. Characters will gain new attributes as the game progresses, adding the ability to replay prior levels and access previously locked areas.

The two biggest questions still left hanging are:
1. Will online co-op be available?
2. Will all players' progress be saved?

Unforunately most signs point to no on both of these so far, but only time - and an official word from Ubisoft - will tell. Check back for our E3 coverage starting today, which will include a closer look at Rayman: Origins!