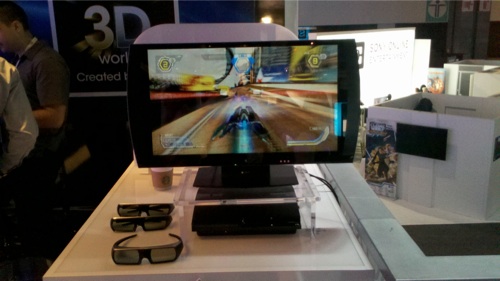 One of the surprise announcements of Sony's E3 2011 Press Conference was a brand new TV they created aimed at a budget friendly consumer market.  The 24" 3D TV features 1080p support, 3D capabiltity, simulated surround sound capability, and of the most interesting feature - a 2 player mode that allows multiple players to see the full screen each with their own unique view.

The LED based TV is going to come with one set of 3D glasses, a copy of Resistance 3, and an HDMI cable for $499.99.  It seems to be a solid deal and for dorm rooms or home offices might be the perfect addition.  Additional glasses will cost $69.99 - so you'll be up and running for co-op for under $600.

There's only a few technical details available so far - but we do know the TV is going to use the new VA panel for its technology giving it a 5000:1 contrast ratio.  The TV will also have a 4MS GTG response time and a 176 degree viewing angle.

We went eyes on with the TV and got a demo of the full screen dual view capability and...yup, it works exactly as intended.  Each player had a completely separate image that took up the entire screen and had no loss in fidelity.  Here's the kicker though - the game will need to be written to take advantage of the tech.  The good news is if a developer is already implementing a 3D mode, this addition isn't much more work.  Throughout the show I talked to a few developer who were already eager to get their hands on the TV and get it working on their title. We imagine since Resistance 3 is shipping with the TV the title will support it (it supports both split screen co-op and 3D), but we couldn't get confirmation on that. The TV looked great and I already want one for my office, its the perfect size for the space.  Hopefully we'll get more details on the TV shortly, including the input capability and number of.  The bundle will be out this fall.