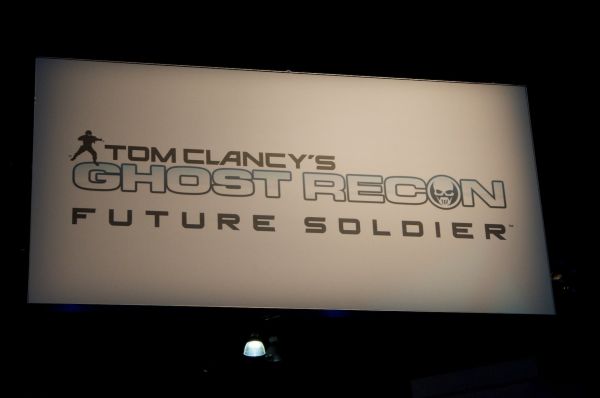 I can't believe how long we've waited for a new Ghost Recon title.  The last game was released in 2007 making it almost a full 5 years between versions.  After getting some hands on time with the latest build of the game at E3 2011 for a little four player co-op action it seems it was worth the wait.  Ghost Recon Future Soldier isn't simply an iteration of the franchise, it's almost a reboot.

Its hard to put into context just what has changed, but it seems as though the "stiffness" of Advanced Warfighter 1 and 2 are gone.  Things feel more fluid and the game itself is definitely more cinematic.  Our demo dropped us into a four player co-op campaign mission.  I was told the campaign is playable online only in co-op but the game will support split-screen play for some of the other game modes.

Our mission was to infiltrate an enemy compound and locate a VIP, once we did, we needed to extract him.  It started out familiar enough, but quickly I began to see little graphical touches like ammo counters that float around your gun as well as other UI enhancements.  Everything just felt really refined, really futuristic, and really badass. Soon we hit our first co-op moment as a handful of guards stood unaware of our presence.  If we took them down without communication we'd risk an alarm.  Luckily holding the right bumper at anytime on a target tells your teammates with a little blue beam which guy is in your sights.  Coordination is key here and we executed successfully.  While these moments are optional and are at the will of your teammates the next moment was not.

We needed to breach a house to obtain intel on the VIP,  so the game gave us assigned positions.  These little white circles on the ground tell the player where to stand to start the sequence.  Once all players took their position a short breaching sequence took place - while we couldn't control our movement we did control our aiming.  This diversity was refreshing and the scenario that played out  was quite satisfying.

The battle continued as we located the VIP and slowly worked our way towards the objective.  The guns felt solid and not all that different from previous Ghost Recon titles, movement from cover to cover was a bit more fluid though.  Once again the standout feature is the UI of the game which simulates high technology war gear giving the location of enemies, what your teammates are doing, and other battlefield information in real time.

Finally we obtained the VIP and we hit the highlight of the demo.  Suddenly it was an all out assault on us with helicopters and soldiers dropping in from every angle.  It was here the game almost became like a light gun or on rails shooter as it gave quick unique perspectives to each player and took control of movement.  Once again we had full control of shooting, aiming, weapons and reloading but we each had our own objective and area to cover.  In quick succession we worked our way backwards to the extraction zone while protecting the VIP.

I ended the demo with a smile, turned to the rep and simply said - "That last sequence was incredible, please tell me there's a lot more of that."  And more of it there is, apparently each mission will have these cinematic moments in them.

Ghost Recon: Future Soldier is out on the 360, PS3 and PC this Winter (hopefully).