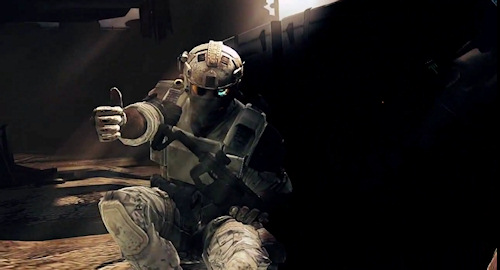 Do you know what is better than co-op?  More co-op!  Co-Optimus is already slathering over the upcoming 4 player online/2 player offline co-op campaign in Ghost Recon Future Soldier, but there is more.  The folks over at Game Rant managed to sneak out vital information from the Ghost Recon warzone about the game's other co-op mode; Guerrilla.

It appears increasingly like no self-respecting AAA title would be without some form of Horde mode, so why would you expect Future Soldier to be any different?  Ubisoft have provided some details about why they decided to include the Guerrilla mode:

Since the beginning of Future Soldier we wanted to have a specific co-op horde mode, but we did not really know… and last summer we were at boot camp with one of our military consultants from the Navy SEALs and one day they explained to us the tactics the Special Forces use in Afghanistan.

So, what the Special Forces did, in this case it was SEALs, is head into a zone they know is host to enemy forces with two or three teams at night and seize a building, kicking everyone out. These same people, who are typically paying protection fees to the local Taliban warlords, run to the leader and say, “there are some NATO guys in the village, come and kick them out.

That's wonderful, but what impact does this have on the gameplay?  More than you would imagine.  By basing the Horde mode on real life tactics the gameplay differs from your usual swarm attacks.  Firstly, Ubisoft have justified why a group of men would be bunkered down, which is nice to see, but there are some real difference in the gameplay.

The 50 waves of enemies are present, but after each 10 waves your team are forced to move onto another objective and bunker down there.  This should lead to some difference in gameplay and stop things from growing stale.