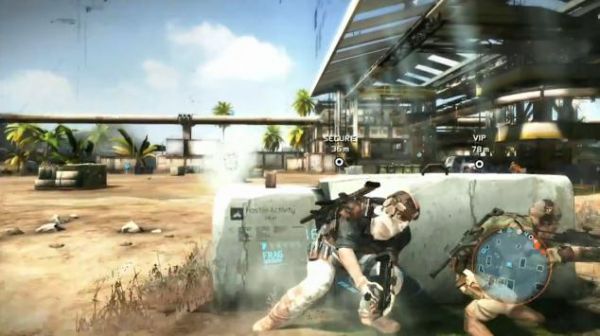 Ghost Recon: Future Soldier plays faster than the previous Ghost Recon games. You need to know this before we go any further. In fact, when you watch the videos below you'll notice a striking similarity to Splinter Cell: Conviction, both in aesthetic and in gameplay. This may be a little premature to say without getting some hands-on time with it, but: it seems safe to assume that if you liked Conviction you'd be right at home with Future Soldier.

Normally I don't like to open articles in such a blunt fashion, especially when I'm counting on you to click through and watch the videos we've embedded for you. But I personally loved Conviction - still do, in fact - and even though gamers were generally hoping for a Ghost Recon title that hearkened to the classics...I'm super pumped for this new game. Keep reading to find out why. First off - Kinect support. So far it looks like the main gameplay is going to be conducted with normal controllers; however, as a gimmicky side function, you'll be able to use Kinect to manipulate your weapon in the customization menu...and then instantly warp to the practice range to see how you like your Frankengun, and then back again. Whether or not Ubisoft decides to expand Kinect support in future Ghost Recon games, they have expressed a desire to inclued at least something significant for the perihperal.

The weapon customization is far more detailed than any other Tom Clancy game to date, and it will prove to be a healthy distraction for gun guys like myself.

Once you have your dream firearm squared away you can play the single player campaign or deploy with up to three other soldiers in a dedicated four player co-op campaign. This begins the long list of similarities that Future Soldier has with Splinter Cell: Conviction.

Gameplay is a mix of stealthy creeping with drone recons and straight-up fast, frenetic, cover-based firefights. Sliding from cover to cover, blindfiring, threat indicators, precision aiming, and even seeing your objectives superimposed onto the environment are all highly reminiscent of Sam Fisher's most recent adventure. A change-up of fonts, colors, and geometric details in the HUD give Future Soldier its own visual identity...but familiarity reigns supreme in the video preview below. Ghost Recon: Future Soldier is not all recycled material, though. Aside from a spattering its signature color pallete and octagonal patterns the game sports some new functionality as well. Players will be able to display their line of sight to their teammates, essentially calling dibs on hapless enemies. This will help squads coordinate strikes against groups of enemies that would otherwise quickly turn into a deadly firefight.

Which is not to say that those won't be prevalent; it looks like Red Storm is providing players with the option to play through stealthily and effeciently or with guns a-blazin'. Hip firing on the run, zooming in for a precise shot, reaching out with iron sights, or getting up close and personal with melee attacks are all options for getting the job done as a Ghost. Extending a fast-paced gameplay formula to a traditionally methodical tactical shooter is a gamble, at best. It looks great to me, but others may disagree. Watch the following video (gameplay starts at the two-minute mark) and discuss what you think of this new, radical direction.