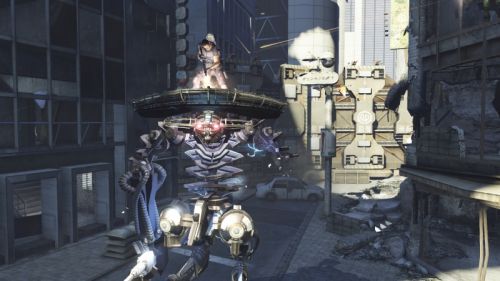 It's a little slow this week. The only truly new co-op release is a third person shooter.  I'll give you a couple hints, and you see if you can tell me where the game takes place.  Hint #1:  It's set in the future.  Hint #2: Robots.  Hint #3: Said future robots, or "frobots," as I like to call them, are becoming too human.  Hint #4: It's not a Blade Runner game (you wish!).

Did you guess Detroit?  Nah man, it's not Detroit.  It's Japan -Tokyo, to be specific.  Better luck next time.

Binary Domain (360, PS3) This squad-based shooter uses AI and voice commands for the single player campaign.  So players are forced to use AI in a game whose tag line is; "Are the robots becoming more human, or are humans becoming more like machines?"  I'm sure I could use the word "meta" here, but I'm not going to.  Four human players can team up and take on waves of enemies in the Invasion mode.  4 player online co-op.

Here is a list of other big titles coming out this week, complete with Amazon links.  If we missed something, let us know in the comments section.