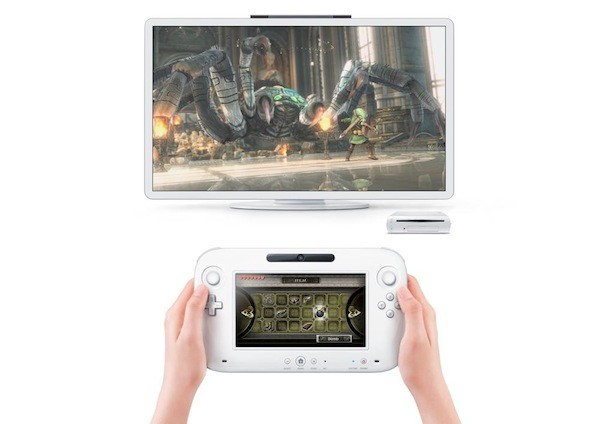 Nintendo's new Wii U console was on everyone's tongue for most of the E3 2011 and a lot of it came from the confusion in how it was represented.  Following the press event I talked to multiple people convinced the console itself was this new controller, no doubt, due to Nintendo only showing the actual console in one slide during their presentation.

Again, this shouldn't be too surprising as every picture of multiplayer on the system during the conference only ever had one Wii U Controller accompanied by 4 Wii-Motes. We already detailed some of the system and controller's features during the show, but one other take away from E3 2011 was how the controller could be used as an alternate screen for the system - namely - the TV doesn't have to be on. The controller's main display can play your game as long as you are in range of the console.

Most likely the bandwidth needed for wireless video transmission is the limiting factor for the number of controllers on the system - especially if its a 1080p signal.  So while co-op may be limited to what you've been doing on the Wii, there still a chance for some out side the box thinking.  Think about the possibitlies of split-screen co-op where one player has their view on the Wii U controller while the other has the TV. Right now the rumored launch date is Spring of 2012 for the system which we'll most likely learn during the Tokyo Game Show this September.

Update:  It seems Nintendo is giving conflicting reports on this now.  Reps at E3 were being told only one controller and all media pointed to this, but IGN has a quote from a source that says the system may support two.