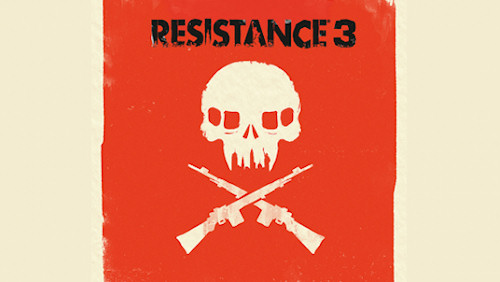 At Sony's booth during E3 2011 I sat down with the Resistance 3 Lead Designer, Drew Murray, for a hands on tour of one of the early levels in the game.  We discussed Insomniac's shift back to more of the look and feel of Resistance 1 for the latest game as well as the more personal story it has taken on.

In Resistance 3 you play a soldier named Capelli who is trying to avoid going back to war.  The name may sound familiar to you if you played Resistance 2 and I won't spoil his role in the story.  The war against the Chimera for all intents and purposes is lost, with only small bands of resistance fighters located in towns across the United States still clinging to hope.  Soon events force you into battle and before long you need to make your way to New York to close a portal that the Chimera are using.  Murray described it as a "buddy road trip across a post apocalyptic United States."  That's right - you'll be bringing a friend along in two player local or online co-op through the story.

I asked Murray about the decision to go back to the more traditional form of co-op from Resistance 1 instead of the eight player mode Resistance 2 offered.  "When we started working on Resistance 3 we actually started with the 8 person mode from 2, " Murray said, "But we got a lot of great feedback from fans of Resistance 1."  This overwhelming feedback caused them to rethink where they put their resources.  But over and over again they kept hearing the same basic thing from the community.  "I just like sitting next to my buddy on the couch with a beer and playing through a campaign." The trip will take your characters from Haven, Oklahoma through a flooded Mississippi town to the mountains of Pennsylvania and finally onto New York itself.  Each area will have their own distinctive resistance fighters that join your cause.  Our journey in Oklahoma started with fighters who were more guerilla style, gritty in your face resistance soldiers who refused to back down.

Visually the level I played was impressive.  It felt like I was dropped into the Kansas setting of Wizard of Oz - the browns, reds and grays of Midwestern buildings clouded by dust from blowing wind.  You see, there's a giant ship headed our way that's generating a huge hurricane like storm.  As the level progresses it gets windier and windier - trees sway and bend, stop signs shake, dust kicks up.  It's incredibly impressive - possibly the most impressive weather visuals I've seen in a game to date and really adds to the tension and atmosphere.

The Chimera are hopping over buildings and coming over fences attacking us from all sides.  I took damage and was told to find health packs.  Health packs I quipped to Murray - old school.  There's no regenerating health here in Resistance 3. I quickly found a building with an entrance way and made myself to the top floor to cover the fighters on the ground.  Old favorite guns like the Bullseye make a return - and are much needed.  A new enemy called "long legs" jumps around - making it almost a requirement to tag him with the alt fire to auto aim my bullets and finish him.  Weapons now have an upgrade system as well, the more you use a weapon, the more XP you earn towards unlocking one of two upgrades on each.  In co-op, each player has their own upgrades that are saved independently.

Finally the square our first battle took place in was cleared, the fighters and I took a back alley to another area - a more populated looking part of town.  By now the winds had become hurricane force.  Visibility was limited, trees were bending at almost 90 degree angles, and the Chimera stepped through the dust like some sort of monster entering through a portal.  It was an intense scene for certain.

My demo ended quickly as I ran into the first boss character, named the Brawler.  I was told these bosses would be multi-staged with several weak spots and will change up attacks dynamically.  I didn't stick around to find out - I had other demos to see and the taste I got of Resistance 3 was enough to sell me on the game.

Resistance 3 is out September 6th exclusively on the PlayStation 3.