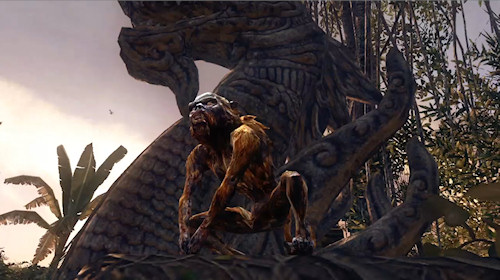 While Call of Duty: World at War saw evil, exploding monkeys - they were only a toy.  The first trailer showing gameplay footage of the upcoming Call of Duty: Black Ops map pack called "Annhilation" has something far far sinister - evil zombie monkeys.

Among other things the trailer showcases the four new versus maps and the new four player co-op zombie map called Shangri-La.  Set in some sort of rain forrest and featuring the previous cast of characters (not the super star cast of the past map pack) - the map looks plenty violent for your co-op zombie slaying needs.  And you do have needs.

Kill the evil monkey...kill it twice.

The Call of Duty: Black Ops Annihilation content pack comes to the Xbox 360 on June 28th for $15.  Other platforms should follow in the weeks afterwards.