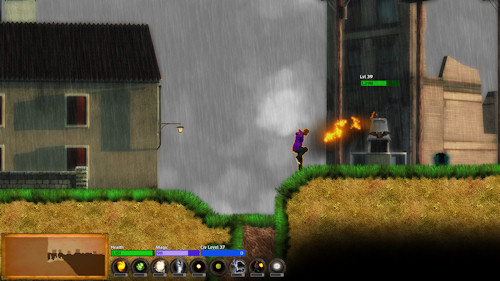 Up until this point, everything we've seen from Arcen Games' A Valley Without Wind has looked impressive, but something seemed off.  The game was originally an isometric view sort of like that of RPGs of old on the SNES and SEGA Genesis and while it worked for the 8-bit style graphics of those days, the more realistic style in AVWW made things look awkward.  Now after months of deliberation the team has switched the game, instead opting to make it a side scrolling affair in the realms of Super Metroid or the more recent Shadow Complex.

The latest developer journal for the game talks a bit about the switch, which fits better not only in terms of graphical style, but gameplay.

Part of what convinced me that this was the right direction to take the game in, and not just for art reasons, was the evolving design of the combat.  I wanted a reasonably tactical gameplay experience, but in realtime that comes down to the choices that you make more than battlefield position.  Location changes too rapidly in this sort of realtime game to be a substantial force for tactical maneuvering, so the bulk of the tactics come down to what abilities you use, and when, and in what combinations.  And I realized that would be absolutely killer in a side view game -- as a kid I had a special love for side scrolling games such as Zelda II, Faxanadu, Ironsword, Metroid, and Castlevania II.

Here's a video showcasing how the game looks from the new perspective.

So while it's obvious now the game is going to be compared more towards Terarria rather than Minecraft, it did make me ask the question - how does this affect co-op?  It turns out that co-op isn't going to be changed at all - obviously they'll be balance tweaks and the like, one of which the game's designer Chris Park told us is already underway.

...one of the things about multiplayer was that your civ level would be going up way faster thanks to having so many more people gaining EXP into the communal "civ level" pot.

It turned out that really was going to be problematic, and there were also some issues of fun where players could be encouraged to grind monsters even in single player.  So what we've shifted this to is a system where the co-op more mirrors single player in terms of the overall difficulty and speed of how you progress through civ levels.  You're rewarded for completing larger objectives, not for every last little monster you kill, etc.

So there you have it - A Valley Without Wind is shaping up to be a really refined and unique co-op experience on the PC.  If the success of similar titles are any indication, this will be one to watch.