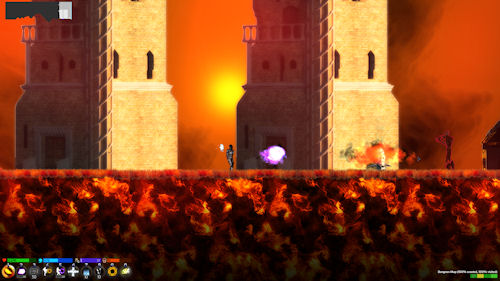 A Valley Without Wind has been in beta for some time now, but there's been a key feature missing in the procedural side scroller - cooperative play.  Arcen Games have announced the game has entered a multiplayer alpha phase - and already it's paying off.

It seems the method being implored for network connectivity was less than satisfactory for many players, causing Arcen to go back to the drawing board for the technical back end of co-op play.  The result?  Arcen have made the decision to do a complete rewrite of the networking code.

The largest benefit is that we'll still be able to make the sort of game we want to make, while having it work well in multiplayer.  The performance characteristics that you're seeing now, including that extreme latency-tolerance for general gameplay, should largely remain.  Enemies will now jitter around some if you have a really latent connection, but it shouldn't be horrible and that's basically in keeping with any other action game, if not a little better than many of them.

A Valley Without Wind is an open world side scroller that mixes in elements of crafting for the PC.  You can pre-order it now for $10 and get immediate access to the beta.  I've been playing it off and on and the screens of the game do it no justice - it's absolutely gorgeous.  We're anxious to see where the co-op in this game goes.