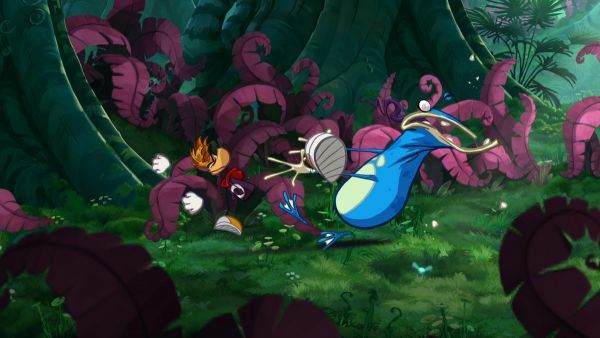 Rayman is back!  Well, not yet, but soon!  Definitely, tentatively, this year... He'll return in Rayman Origins, which was originally planned as an episodic downloadable title.  Ubisoft decided that there was just too much Rayman to go around, and now the game will be a full retail release.  This time Rayman will have three friends along for the ride.  He's actually kicking one of them in the face in the above screenshot.  Rayman and Globox have a complicated relationship.  This latest trailer shows off some of the bright, beautiful graphics, gorgeous (and delicious) stages, as well as synchronized swimming!  We all know everyone loves water levels, right?

Rayman Origins is currently scheduled for a November 15th release on the Xbox 360, PlayStation 3, and the Wii.  It will support 4 player local co-op.

If you're headed to San Diego Comic Con 2011 this weekend, you can get some hands on time with the game. Here's some more info.

Rayman Origins is taking Comic-Con International by storm. Visitors to the Ubisoft booth will have an opportunity to play Rayman Origins for the first time before the game’s release later this year. Rayman Origins is a high-definition 2-D side-scrolling platforming adventure featuring full 4-player co-op. Additionally, Rayman Origins fans can win a free T-shirt by checking in on Facebook at the Rayman Origins billboard at 6th Avenue & F Street, in the Gaslamp quarter, and then claim their prize at Ubisoft’s booth.