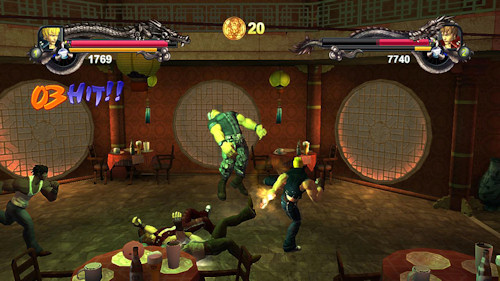 As we’ve said before, the arcade version of Double Dragon was a hugely influential co-op beat-em-up. It set the standard by which all subsequent “belt-scrollers” were judged, from Final Fight to TMNT. Naturally Double Dragon received a sequel, Double Dragon II: The Revenge. That game is now coming to Xbox Live Arcade courtesy of Korean developer Gravity Co, Ltd. and publisher Barunson Creative Co. Ltd.

Complimenting the new look is gameplay that mixes both old and new elements. Wander of the Dragons is still a side-scrolling beat-em-up in which brothers Billy and Jimmy Lee team up to avenge the death of Billy’s girlfriend Marian at the hands of the Black Warriors. I actually like to imagine that both brothers dated her simultaneously – I mean, they are the Double Dragons, right? Surely they do everything together. Moving right along… This remake features a modern combo system that should add some depth to the traditional beatings. As for special moves, the cyclone kick returns - looking better than ever - and is joined by a diving knee kick. Players and enemies can still hurt each other with weapons, including knives, grenades, two-by-fours, and others. Wander of the Dragons’ Story Mode (which supports two-player co-op, just like the original) is based on the arcade game, which featured four long levels and several bosses. Classic enemies like the female whip-wielder Linda, and machine-gun-toting Willy return sporting revamped character designs. Burnov, the arcade game’s masked boss, has lost his mask (aww) and is now explicitly portrayed as a genetically enhanced fighting machine. Joining the Black Warriors gang in this installment are an additional female foe and a giant living statue.

The new stages contain plenty of elements from the original stages, such as the helicopter in the background of stage one and the wheat field in stage three. Even though this version isn’t based on the NES game, it does borrow a few elements from the 8-bit interpretation such as the ride inside of a giant helicopter. The helicopter scene now incorporates quick time events, as do a few other sequences. We’ve also seen an entirely new segment that takes place on top of a moving logging truck. Can’t complain about the variety!

Anyone who played the first NES Double Dragon should remember how that version lacked co-op play, which it replaced with a two-player versus mode. Wander of the Dragons’ versus mode works the same way, allowing players to select from not only Billy and Jimmy but also Marian (playable for the first time) and several enemies. It also ups the ante to four players, which should make for some great couch brawling. Rounding out the gameplay modes is Survival Mode, in which players take a character of their own choosing and try to survive for as long as possible against never ending waves of enemies. Double Dragon II: Wander of the Dragons looks like it will have plenty to keep fans of the cooperative (and competitive) beat-em-ups busy. It’s currently on track to launch in September at a cost of 1200 Microsoft Points. The only question that remains up in the air is whether the game will have online play; the developer wasn’t able to confirm either way. If the multiplayer is limited to local-only, the steep price point will be hard to justify for all but the most hardcore Double Dragon fans. In any case, you can look forward to our full review when the game hits the Marketplace later this year.