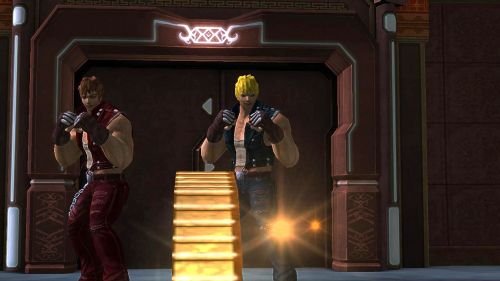 Back in July of 2011 (ahhh, what a heady, magical time that was), we had some news of an upcoming (so it was believed) remake of the arcade version of Double Dragon II, now subtitled "Wander of the Dragons." Between that time and now, the series saw something of a reimagining in the form of Double Dragon: Neon, an effort that Paul found to be quite enjoyable whether playing the game solo or with a friend. Now, the announcement for Neon came around April of 2012 and the game saw release that September. Meanwhile, on the Double Dragon II: Wander of the Dragons front... Well, we've finally gotten some achievements, so maybe the game will see a release soon? Or at least, this year?

Fair warning for a few of the achievements, they may be considered semi-spoilerish for the game's story.

Explosion of Rage 20
Find Marian's necklace in the Heliport

Legendary Master 40
Clear any stage with a hit ratio 100:1(land 100 attacks for every hit you take) or higher

Die Hard 40
Clear a stage with no health points left

Some of these achievements, like the "Just Like Bruce Lee" or "Invincible," look like your typical challenge sort of achievements. Others, and here I'm looking at "Legendary Master," seem to be the sort of endeavors only those who are unsatisfied with the regular challenges a game like this brings would strive to undertake. Hopefully developer Gravity has been tweaking a lot of the in-game mechanics and leaving little unlockable goodies that tie back to the original arcade game so that once this game finally becomes available, the wait will have been worth it...

Who am I kidding. I'd probably settle for a Shadow Master cameo from the Double Dragon cartoon series.