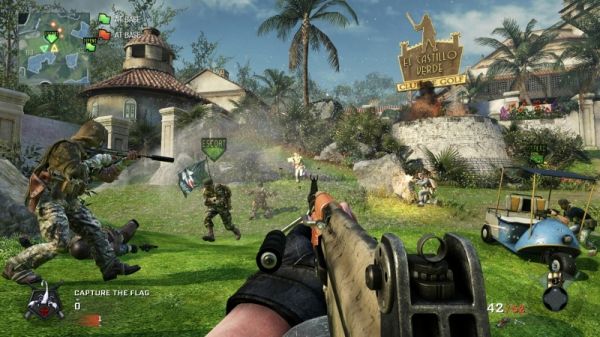 If you are still playing Call of Duty: Black Ops, well, you're probably pretty damn good by now.  Surely you're ready for a few new areas where you can camp valiantly charge into battle.  Annihilation is the latest map pack from Treyarch.  True, the DLC came out a month ago on the 360, but if you're gaming on the PS3 or PC, it's new to you! .  Annihilation has four new multiplayer maps which can be played cooperatively versus bots, and then there is a new co-op Zombie map, Shangri-La.  For an in-depth look into the map pack you can check out our impressions here.

The Call of Duty: Black Ops - Annihilation map packs are available now for the Xbox 360, PlayStation 3 and PC.  The game supports up to six player online co-op, as well as 2 player local co-op.  Annihilation is priced at  $15 dollars.  For a brief description of each map, simply click  "Read More."

"Hangar 18," buried deep within the military black site Area 51, where gamers will battle through experimental weapons labs, the SR-71 test hangar and a mysterious autopsy room.

"Drive-In," where players engage in close-quarters combat through a 1960s drive-in theater, complete with snack shack and a classic arcade.

"Hazard," perched on the verdant Cuban cliffside, where gamers traverse a coastal golf course fit for a dictator. This is the only set of links where the hazards shoot back.

"Shangri-La," the all-new Zombies experience, which transports players to a mythical paradise overrun with the undead. Face off against new species of zombies and navigate a treacherous labyrinth of underground caverns, all set within a lost jungle shrine.