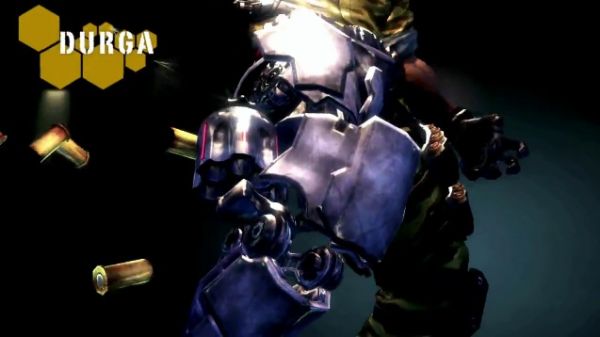 Meet Anarchy Reign's latest character, Durga.  He's like a tiger-man, but with a cannon leg.  He's got a bionic tail and everything.  Yep, that's a picture of it up there.  The leg, not the tail.  It's a revolver, because a magazine or belt-fed cannon would just be stupid.  I really don't know what else to say about him.  The characters in Anarchy Reigns are ridiculously over the top, from Mad World's awesome Jack, to the "I-can't-believe-he-won't-get-altered-in-localization-due-to-the-fact-that-he's-incredibly-offensive" Blacker Baron.  The game still needed some work when I played it at E3, but the characters were fun and intriguing.  I won't write it off, mainly because I saw slots for 17 playable characters, and we haven't seen them all, yet.  Each one's more ludicrous than the last.  I can't wait to see what the mad minds at Platinum Games come up with next.

Anarchy Reigns will be out in early 2012 on the Xbox 360 and PlayStation 3.  It will support a four player co-op mode.