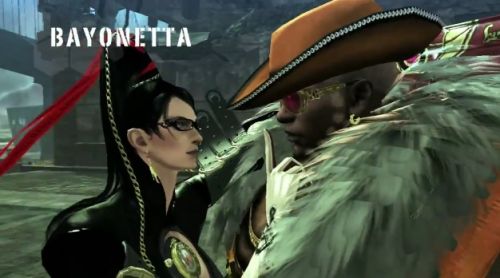 Anarchy Reigns is picking up a sexy new character -- if you're into the whole sultry-librarian-witch-who-wears-a- bodysuit-made-out-of-her-own-hair-while-quad-wielding-pistols sort of thing. Then again, who isn't? While it's not exactly Bayonetta 2, Anarchy Reigns will allow players to step into the weave witch's ballistic heels while brawling with several other insanely unique (or uniquely insane) characters.

According to Famitsu (via Andriasang), Bayonetta will be available as a playable character through a pre-order bonus. I just swung by the Anarchy Reigns Japanese home page (It's called Max Anarchy over there -- I know, that's way cooler) and that site said she was part of the limited edition. It's possible all of the pre-orders will get the automatic upgrade to limited edition status.  One things certain, she's in there. I even found this nifty video featuring her molesting a giant monster while executing it with a guillotine.

As cool as that trailer is, Bayonetta has yet to be confirmed for the North American roster. I'd be shocked if she didn't make the jump stateside. I hope Platinum games follows up Anarchy Reigns with a co-op game featuring Madworld's Jack Cayman and Bayonetta.  Admit it. That would be awesome.

Anarchy Reigns will launch on July 3rd for the Xbox 360 and PlayStation 3. It supports a four player online cooperative survivor mode.