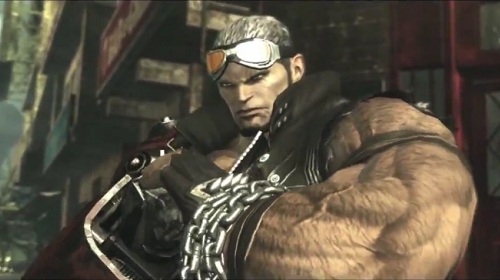 Last month we told you about about the extra content coming to those of you who pre-order Anarchy Reigns, the massive online brawler. If you pre-order the game from Gamestop you'll get access to Bayonetta as a playable character, as well as two new multiplayer modes. Yup, it's another one of those pesky deals exclusive to GameStop. Them's the breaks.

Today we have two videos featuring "Mad Survival," "Dog Fight," and Bayonetta herself in action. The "Mad Survival" mode is similar to the standard cooperative survival mode, except now you'll have to battle against other playable characters, as opposed to the standard grunts. You're still co-oping against AI opponents, only now they're much tougher. "Dog Fight" mixes melee fighting with aerial combat. How do they do that? Watch the video and find out. And then there's Bayonetta, who seems to be even more naked than usual. Good times.

And that's how you mix melee fighting with aerial combat.

Anarchy Reigns supports three player online co-op. It will launch on January 8 for the Xbox 360 and PlayStation 3. While the GameStop exclusivity deal may turn off some gamers, you should be happy to know that the game will retail for $29.99.