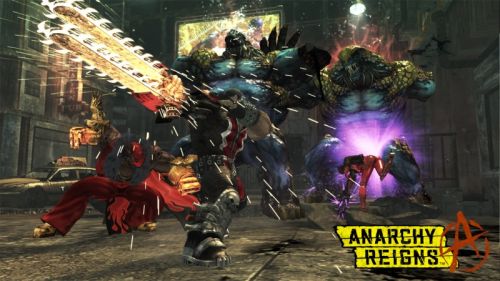 Remember Anarchy Reigns? Of course you do! Who could forget these videos? The giant online multiplayer brawler came out in Japan a few months ago, and it's heading to the US early next year. Like all Platinum Games projects, this title features insane action. Like, certifiably insane action. I played the demo and got my butt kicked repeatedly. I kind of loved it.

Anarchy Reigns features 17 playable characters, including Jack (aka Chainsaw Steroid Arms) from MadWorld and Bayonetta (aka Ms. Sexy Pants) from, well, Bayonetta. The 15 other characters look even more ridiculous. One giant robot bull monster has a jet powered hammer, and he's kind of a normal one. I took the liberty of posting the ridiculous launch trailer again. Enjoy the crazy after the break.

Anarchy Reigns supports a three player online Survival Mode. There are several different modes that allow for player versus player or player versus AI matches, allowing for different cooperative opportunities. Anarchy Reigns will launch on January 8th next year on the Xbox 360 and PlayStation 3. It will be priced at $30, which is awesome! Man, I'm sure glad I didn't import that sucker for a hundred bucks...