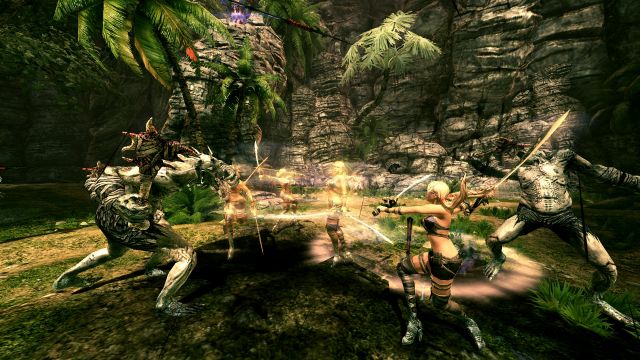 Hey Konami's Blades of Time was revealed back at E3, but we somehow missed the two player cooperative title while at the show.  Perhaps it was all the shiny madness that surrounded us.  The game is being developed by Gaijin, who's other co-op title was Apache: Air Assault.  I know - odd combo.  Giant metal helicopters and tiny metal clad bikini girls.  Where do we sign up?

Not much is known about the game's cooperative mode, due to some translation issues, the co-op is either it's own story or through a separate story - but it is online for two players.

Blades of Time stars Ayumi, a dual sword wielding heroine capable of learning various magical abilities to rid the world of Dragonland of nasty looking creatures.  The game promises to be a thinking man's action game, where button mashing your way to the 40 or so attacks won't necessarily be the best choice of combat.

Blades of Time is out next year on the Xbox 360 and Playstation 3.