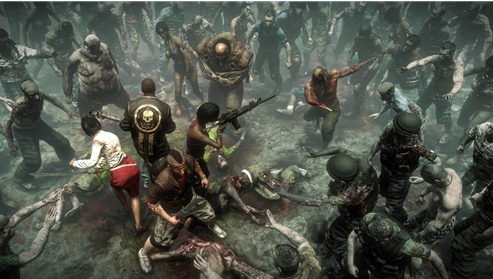 We break down the common co-op questions and pass on some tips for Dead Island.

How many players does Dead Island support in co-op?

Can I play split screen or couch co-op in Dead Island?

Unfortuantely, no.  There's no local co-op play of any kind.

Can I play Dead Island over a LAN or System-Link?

Can there be more of one character in a co-op game?

Yes.  You can mix and match any of the game's four characters.  This means you could have an entire four player co-op game filled with four Purnas.

Are players tethered together during co-op play?

You are free to roam anywhere in the zone you currently are without being tethered to another player.  These include the jungle, resort, city, etc.  Each one of these zones provides a huge playing area completely untethered from the other players.  The game will warp all players to the same spawn point if any player uses the fast travel system.  Players will need to be near each other to complete certain mission objectives.

Does the game scale in difficulty for co-op play?

The more players in a game,  the more zombies there are to kill.  Zombie level still appears to be tied to the host player.

Does the game save the progress of guest players?

Does the game scale items for guest players?

Can I join a game of a friend that is a higher level?

Yes.  You won't get any quest progress saved, but you will earn XP and items tailored to your level.

Can I join a game of a friend that is a lower level?

Yes.  You'll earn quest progress on any side quests you didn't complete as well as earn XP and rewards from quests already completed.  Once you have caught up to your own chapter progess will be saved in your own game.

Are there team based skills?

Certain skills like those that affect money and XP benefit the whole group.  When Sam B's passive skill that allows him to earn more money is acquired, everyone benefits.  Purna, in particular,  has several passive buffs that will effect teammates within a certain distance to her.

How do achievements and trophies work in co-op?

You can earn single player Achievements and Trophies in Co-Op, both as a host and as a guest.

How do collectible items work?

Collectible items, such as personal ID's, recordings, and mods, exist as a separate entity in each character's game. If player 1 picks up an ID, player 2 will still see it on their own screen. Each collectible has to be picked up by each individual. It is impossible to "steal" another player's collectible item.

What about consumables items? How do they work in co-op?

Consumable items, such as energy drinks, med kits, and weapon parts can be shared, stolen, hoarded, whatever. When a player picks one up, they disappear from everyone's display. I should note that almost all of these items respawn if you leave an area and come back. This includes cash. (This seems highly exploitable, and I suspect it will be patched eventually.)

I can't find anyone to play co-op with! Help!

The game makes it extremely easy to find people with similar progress.  You'll see a prompt appear on your screen if you are near someone who has a compatible story with you.  If not you can always try the Co-Optimus Forums! STAMINA IS KEY - If you're not kicking, you're probably dying.  A lot.  Your kick is your most valuable weapon.  You can use this to knock zombies down or to stop a charging infected.  Kicking doesn't use stamina, it never needs to be repaired, and you can eventually learn how to curb stomp.  If you don't want to spend the whole game at workbenches, I strongly suggest using it often.

FOCUS ON A FEW - There's going to be A LOT of items to pick up, focus on 2 or 3 as your main weapons and just worry about them.  The rest can be throw aways

AIM FOR THE HEAD - It should go without saying, but damage is location specific.  Aim for the limbs or head of an enemy to incapacitate them.  Plus - you can earn bonus XP.