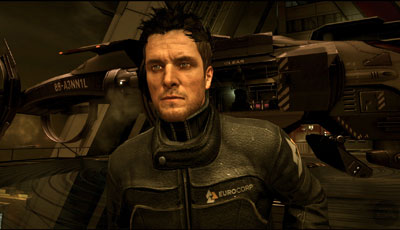 Screens and Info of the long rumored Syndicate game have surfaced early on EA's Origin service before quickly being pulled.  As with anything on the internet, once released, it's there  forever no matter what you try to do.  A NeoGaf poster managed to snag some screens and info from the game and it's all good news for co-op fans.

2069 – No longer governed by politicians, the developed world is divided up into regions controlled by megacorporations known as Syndicates. These Syndicates have revolutionized how the consumer interacts with the digital world. No longer does the consumer require a device to access the world¡¦s data and control their technology, they can do this at the blink of an eye via neural chip implant. Civilians flocked to be ¡§chip¡¦d¡¨ and enjoy all that their selected Syndicate has to offer; housing, medical, banking, insurance, education, entertainment and jobs. One complete package. One complete lifestyle. In return, the Syndicates gained unprecedented insights, and control, over the individual and their behaviour. With little governmental oversight, business has become war. The Syndicates will stop at nothing for ultimate market dominance. At the front line of this war are the Agents, the Syndicate¡¦s bio-engineered and chip-augmented enforcers. They can breach anything in the wired world including their enemies, their weapons and the environment that surrounds them, making them the most efficient and deadly technological weapons in the world.

The best news is full four player online co-op support for the game.  It's unclear just what kind of game the new Syndicate will be - though some of the screens show first person action.  Whether the original game's strategy element will be present remains to be seen, though one new addition is the "Chip Enhanced Gameplay."

Slow down time, see through walls, and breach your enemy and everything digital in the world with Dart vision – A neural DART6 chip implant that allows you to interface directly with the Dataverse.

Update:  The game was officially revealed today including a bunch of hi-resolution screens.  All the above information was confirmed as well as the developer, Starbreeze.  It appears the co-op mode is separate, as the official info states that the game also provides a separate and deep 4-player co-op mode featuring missions from the original cult classic.