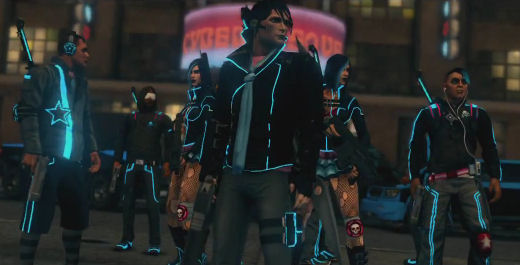 Saints Row: The Third is quickly shaping up to be one of the biggest and most diverse co-op titles this holiday season.  We've seen some insane looking videos for the game, and the latest trailer adds to that.  In it we get introduced to a group called The Deckers, these cyber punk hackers seem to have created their own TRON like virtual reality in which the Saints have to hack into to get all their money the group conveniently stole from them.  That's a kind of mission you just don't see in any open world games now a days.

Speaking of missions and content - it seems that Saints Row: The Third is going to be having some serious content support over its life, something to the tune of 40 pieces of content over the next year.

Already, THQ is thinking about such digital revenue streams for its top games. Saints Row the Third, a major THQ crime game world debuting on Nov. 15, will be accompanied by about 40 weeks worth of downloadable digital content after the launch.

“We totally change how we keep consumer engaged for a very long time,” Farrell said. “We intend to create an online digital ecosystem that keeps them interested for a year or more.”

Now it's not clear whether or not that's actual DLC, online challenges, or something similar.  This could be as simple as a new outfit for a character versus an entirely new mission.  Still - it's good to see THQ really getting behind the franchise and game - one that looks to be the biggest of the series by far.