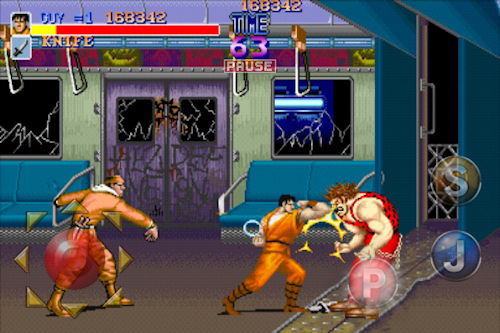 Capcom Arcade is a multi-game app for iPhone and iPad that lets players sample and purchase classic Capcom titles. The latest addition to the app: Final Fight, one of the all-time classic co-op beat-em-ups.

The iOS version of Final Fight is based on the arcade original, not the slightly less amazing Super NES version. All of the graphic details and levels seem to have survived intact, which is impressive enough on its own. The game uses a virtual stick and d-pad and has two difficulty options: iPhone (easier) and Original (harder). Like many iOS games, optional microtransactions allow players to buy more lives and other bonuses, but they aren’t necessary to enjoy the game.

Super Nintendo Final Fight lacked multiplayer, but the iOS version includes Bluetooth co-op for two players. That means you’ll need to be in the same room to play with another person, but on the bright side, many of your local gamer friends may own iPhones. I hear the things are pretty popular.

Final Fight costs $2.99 from within the Capcom Arcade app, but it’s on sale for 99 cents through Wednesday the 21st. Me, I hope Capcom brings this to Windows Phone some day.