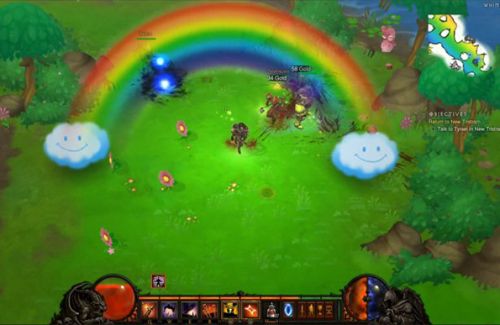 Everyone is happy over at Blizzard HQ.   The sun is shining, birds are singing, the rainbows are out.  And their game, Diablo 3,  just sold 10 million copies in less than 6 months.  Holy moly.

Year-to-date, Diablo 3 is the top-selling game overall based on enough meta, digital and retail sales in North America and Europe. Diablo 3 has sold already in excess of 10 million copies.

After sales numbers were discussed, Mike Morhaime - co-founder of Blizzard  - announced had this to say about an expansion pack in the works.

We do have an expansion planned for Diablo 3, I don't have any timeline to talk about. I think the most important thing for us always comes down to the quality of the expansion and the gameplay, so that will be a big factor in terms of driving our schedule.

Blizzard has taken a lot of flak for Diablo 3, alienating a lot of core fans from the experience who are not happy with a lot of the changes, the biggest is the always on internet requirement which plagued it during launch.  Apparently this hasn't affected sales one bit.  It should be noted that Blizzard has also been very responsive to community feedback and the current version of the game (1.05) continues to make several enhancements to the title.