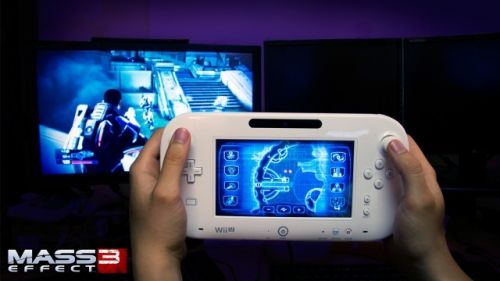 Mass Effect 3; been there, done that, got the avatar t-shirt.  You may have completed the game on PC, PS3 or 360, but have any of you finished the WiiU version?  No, because it does not exists yet, but will by the end of the year.  Proof is in these images from Bioware, depicting the slightly better graphics and unique control interface for the WiiU version of the game.

The Mass Effect 3 WiiU experience will not differ that much from the tried and tested formula already set out, but Bioware do promise a new control scheme and a few added extras:

Mass Effect 3 on the Wii U features a brand new control scheme designed to incorporate the Wiipad. It will also feature bonus DLC including the Extended Cut, an Interactive back story covering previous events in the Mass Effect universe, and Mass Effect 3′s critically acclaimed Multiplayer experience.

The mention of a critically acclaimed multiplayer experience may just be referring to Co-Optimus who gave the 4 player online co-op mode an acclaiming 4 out of 5.  With the WiiU version of game reportedly launching in late December will there be enough incentive for people to play the 9 month old title, especially as many of us would already have completed it?  Wii will see.