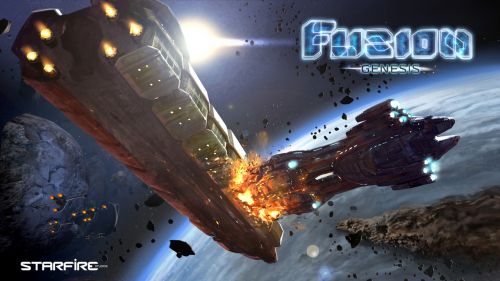 We've only briefly seen anything on Fusion: Genesis, a twin stick shooter that blends in MMO elements from upstart studio Starfire.  The game's soundtrack was created by ex-Rare employee Steve Burke, who has soundtrack credits that include Kameo, Viva Pinata, and even the music you hear on your Xbox 360 dashboard.  Apparently Fusion: Genesis is nearing release and Steve was kind enough to release the game's  one hour and twenty-two minute sountrack for free.

There's an interview with Mr. Burke over at ScoreNotes.com, and in it, we learn some details about the co-op game which is due out this winter including the proposed playtime of the title.

For an arcade title this could be an incredible value if this holds true.  Steve was kind enough to send over a behind the scenes shot of the mixing of the soundtrack.  You can also download the soundtrack by clicking the album cover located below. Fusion: Genesis is out this winter exclusively on Xbox Live Arcade with 4 player online co-op.