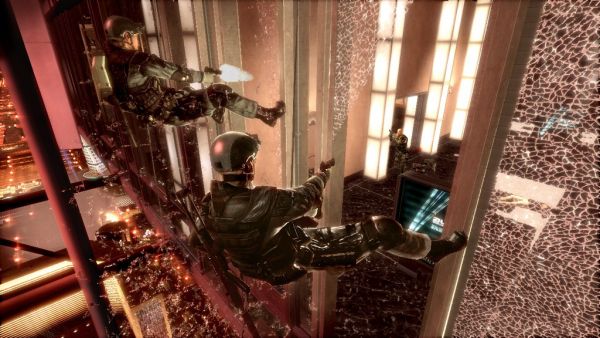 I love me some T-Hunt.  This is the Rainbow Six game mode that allows 4 players to co-op together and take on a map of AI enemies.  The next game in the series has already been announced, but currently remains nameless.  This is about to change as recent domain names suggest Rainbow Six: Patriots will be its moniker.

Ubisoft recently registered the domain names Rainbow6Patriots.com and RainbowsixPatriots.com.  If this was not enough grist for your rumor mill, then how about the inside skinny from someone reporting to have seen the game already?  Neogaf member Blitz wrote:

As the title says and the game being already rumoured by Fusible.com I can confirm it now that the next Rainbow Six will be announce on Xbox World Magazine in the upcoming month (if I understood correctly from my contact). Last night I got home with the assets; logos, arts, the covers and rendered game screens from a buddy that I know in marketing. I will not going to show anything for the moment as I will let the mag do his work, but what I can tell is that the logo is 6 with the pistol that replace the bottom circle. The arts backgrounds are with the New York in fire and the renders characters are very similar to Homefront, yet the clothes are still based with police rainbow six gears. What I understood the plot will go between a large group of revolutionary terrorists and of course the police.

I love a good rumor and this is a doozy.  Rainbow Six: Patriots will be a more gritty take on the franchise in keeping with the likes of Modern Warfare 3.  There is no news yet about the level of co-op that the game will have, but the last two games have been 4 or 2 player co-op throughout.  Fans of the Rainbow Six games should remain patriotic to Co-Optimus as we will keep you informed when any news peaks its head above the parapet.  Sounds to me like next month's Xbox World may be of interest ....